Look, I am easily pleased by puns and CGI that is halfway-decent. That means that most modern movies aimed at younger viewers will tend to keep me amused. I'm not always the most mature person in the room, and I am absolutely fine with that. I am fine with being able to sit back and do my best to be open to whatever a movie is trying to provide. But that doesn't mean that I'll just sit there and give everything a free pass, even if it may seem that way sometimes when I am reviewing movies while being more charitable than some.

Bee Movie isn't as bad as you may have heard. It's also not that good. It sits squarely in the middle, hampered by some strange choices in the plotting and voice cast.

Jerry Seinfeld is the voice of Barry B. Benson, a bee who doesn't necessarily want to move straight into his working life when he is deemed ready for it. Despite the protests of his friend, Adam (Matthew Broderick), Barry heads off for a trip into the wider world outside. He then ends up befriending a human named Vanessa (Renée Zellweger), which leads to him finding out the horrible truth about just what happens to all of the honey that the bees make. Something has to be done, but what will the repercussions be?

Directed by Simon J. Smith and Steve Hickner, two men who have a directorial selection composed of more shorts than features (although the latter has a much more extensive selection of projects he has worked on as an artist), this is a strange central concept that is squeezed into a fairly traditional, family-friendly, movie. A lot of people worked on the script, including Seinfeld, and it feels like all of them had a different idea of just what kind of film they were making. Ironically, that makes some of the crazier moments among the most fun, certainly for older viewers (the highlight being a moment in which Ray Liotta is called as a witness in a court case, playing himself).

As much as I like Seinfeld, his voice doesn't feel right for the lead role here, and I'd struggle to think of any animated movie that would work with his particular vocal stylings at the centre of things. Matthew Broderick is better in the role of the best friend who is happy with his lot in life. Zellweger is also good in her role, helping to sell the fact that her character can become firm friends with a bee. But the best work comes from the three people I can enjoy listening to at any time: John Goodman (as a lawyer), Chris Rock (a mosquito), and Patrick Warburton (a human who has his life turned upside down by Barry).

Children should enjoy seeing the world that is created for these bees to be living, and working, in. Adults should enjoy the more random moments, such as that Liotta highlight and a honey-steeped homage to The Graduate. Few people will enjoy the whole thing as a cohesive movie experience, but there are enough moments to amuse and help the runtime pass by painlessly enough. Oh, and the CGI is halfway-decent. Halfway. 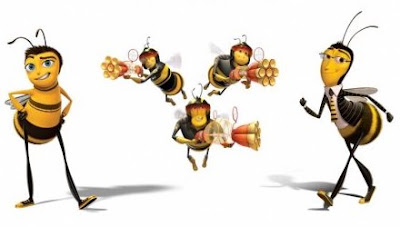