Spider-Man: Into The Spider-Verse is the best Spider-Man movie made, to date. That's not to say that some of the others don't come close, or to call this perfect. It just captures the spirit of the character, and the comic-book style, better than anything else put onscreen so far, helped in no small way by the stylistic choices made, and a fantastic voice cast.

Shameik Moore plays Miles Morales, a teenager who finds his life becoming a bit more problematic when he's bitten by a spider and turned into Spider-Man. It's confusing because, in the universe that Miles inhabits, there is already a Spider-Man (Chris Pine). And then another Spider-Man (Jake Johnson) turns up. And then quite a few other incarnations of the character also turn up: Spider-Gwen (Hailee Steinfeld), Spider-Man Noir (Nicolas Cage), Peni Parker (Kimiko Glenn), and Spider-Ham (John Mulaney).

Taking a cue from the character of Morales, this is a movie infused with the energy and colour of well-made street art. It has a sense of anarchy art times, and yet remains surprisingly on point when it comes to the kind of lesson that we're used to seeing delivered by a Spider-Man film. It's loud and vibrant for a lot of the runtime. It also takes some time to allow Morales to try sorting through his own muddle of thoughts as he figures out how best to adapt to his potential new life.

Directors Bob Persichetti, Peter Ramsey, and Rodney Rothman do a great job with the script, co-written by Rothman and Phil Lord. There's a reason for the events onscreen (a device being fired up by the main villain, Kingpin) and everything is balanced out perfectly. You get plenty of moments to make you laugh, plenty of fun action sequences, and a plot that actually makes sense and builds towards the sort of spectacular finale you get from any standard superhero movie, despite this feeling far removed from standard superhero movies in a number of ways.

The voice cast are absolutely superb, across the board. As well as those mentioned, you also have great work from Brian Tyree Henry (the father of Miles), Mahershala Ali (a cool uncle that Miles looks up to), Liev Schreiber (Kingpin), Kathryn Hahn (a scientist working for Kingpin), Zoë Kravitz, and Lily Tomlin.

The only thing holding this back from being a perfect movie is the fact that it's sometimes a little bit TOO loud and busy in scenes that have your eyes darting around to try and take in every single detail. And most scenes have plenty of details that will make this a treat to rewatch again and again.

Who would have thought that, while attempting to tell various Peter Parker adventures again and again, the secret to making the most satisfying Spider-Man movie to date would involve putting Miles Morales front and centre? Actually . . . a lot of Miles Morales fans have been saying it for years. It's good to see that others can now see how right they were. 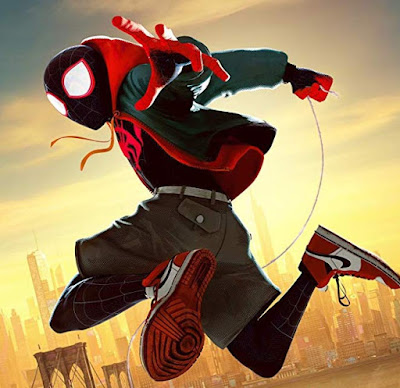