Love or hate Adam Sandler, and most people fall firmly into the latter camp nowadays, it's hard to deny the easy appeal of the animated movie series that cast him in the role of Dracula. Almost every classic monster you can think of makes an appearance, the jokes are no less amusing for their obviousness, and everyone seems to be having fun doing their voice work.

This time around, after surviving the perils of seeing his daughter fall in love with a human (in the first movie) and then figuring out how to best be a grandparent (second movie), Dracula is taken on a holiday on a cruise ship. The whole gang is with him, of course, and there's an immediate connection between Drac and the ship's captain, Ericka (Kathryn Hahn).

Although not quite as good as the two films preceding it, this third adventure for "the Drac pack" has plenty packed in it to keep fans of the series amused. None of the characters are twisted into something they shouldn't be, mainly because that work was done in the first movie when the monsters realised they could get along with humans, and the straightforward plot has a couple of twists that you can see coming from the opening scenes and a finale that basically falls back on that old standard, a dance off.

Sandler is good in the lead role. In fact, I would say that most people will find him much more enjoyable as an animated Dracula than in his normal, live-action, guise. Selena Gomez and Andy Samberg are just as good, playing Drac's daughter and son-in-law, respectively. Hahn is good fun as the cruise captain with an obvious secret, and Kevin James, David Spade, Steve Buscemi, and a few others return to join the monster mash.

Also returning is director Genndy Tartakovsky, who has been at the helm since the first movie a few years ago. He also co-wrote the script, with Michael McCullers, which manages to keep focused on the leads while also providing a selection of amusing moments for each one of the main supporting characters.

If you enjoyed the previous Hotel Transylvania movies then you should enjoy this one. I'd prefer them to end it here, having already started creeping down the slope of diminishing returns, but I also know that I will watch any future instalments.

There's a good triple pack here.
Americans can pick it up here. 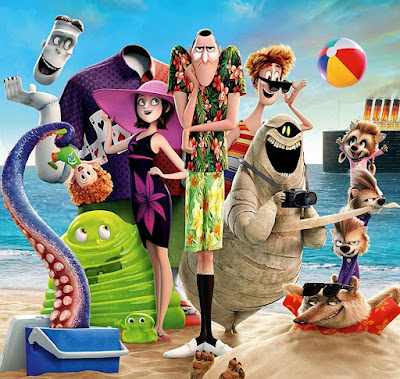