Apologies, but some minor spoilers follow, because An American Tail ended up having some surprisingly relevant plot points that I really want to bring up.

Let me tell you a story. It's all about a family of immigrants who flee a dangerous home country to seek shelter somewhere they think is free of their enemies. The journey is a tough one, leading to one child being split from the family. That child arrives in America, initially befriended by someone else who has come to the country from elsewhere, and knows how much it can give to people seeking a new life there. Unfortunately, the next person the child meets is not so good. The optimistic immigrant is soon surrounded by perils, including a self-serving and thoughtless politician and, perhaps most relevantly, someone who seems to be helping "his own kind" until it is revealed that they are in fact one of the dangerous predators they claim to be able to keep away from the vulnerable, for a fee.

Sound familiar? I'm sure many people have been in that position, and it's probably the backdrop to many news stories that we have read in the past few years, whether we realise it or not. And, yes, it is the main plot of An American Tail, an animated film that focuses on the perilous odyssey of a little mouse named Fievel (voiced by Phillip Glasser). This was a film I had no interest in for many years. As a child it just looked a bit too bland for me, as an adult it just, well, still looked too bland. I was very wrong.

Directed by Don Bluth, this is a beautiful and sweet story that has enough to keep children entertained, and often keep them quite tense, while also sketching out a familiar backstory for many families who managed to uproot their lives in the past and head over to make a new life in the USofA. It's a lot more optimistic and upbeat than a film made today about those experiences might be but that doesn't make it any less effective. The message is all about the risks and opportunities, the strength needed to succeed in such an endeavour, and the ways in which immigrants helped build America, literally, and continue to do so. That may all be intentional (and considering the people able to input anything to the central premise, especially Steven Spielberg, I suspect so), maybe it's not, but it's there anyway.

The animation is quite lovely, often on a par with the most famous animation studio in the world, and the script, written by Judy Fruedberg and Tony Geiss, is an enjoyable mix of cute and smart, with the former being inevitable when you consider how adorable little Fievel is.

The voice cast are a mixed bag, all picked more for their suitability to certain roles than for their immediate recognition. While I will say that I am glad we get names involved such as Madeline Kahn, Dom DeLuise, and Christopher Plummer, I will also say that Glasser is absolutely wonderful as the little mouse at the centre of events, and the moment in which his childish voice, and one other, amateurishly sings a rendition of "Somewhere Out There" is probably the sweetest thing I have seen in a movie in quite some time. There aren't lots of other songs but the ones that you do get are very good, and you also get a lovely score from James Horner to help things along.

I recommend this to everyone who enjoys a good animated movie, especially now that it has become surprisingly relevant with the some of the main plot points, and I hope to now catch the first sequel at some point in the near future. 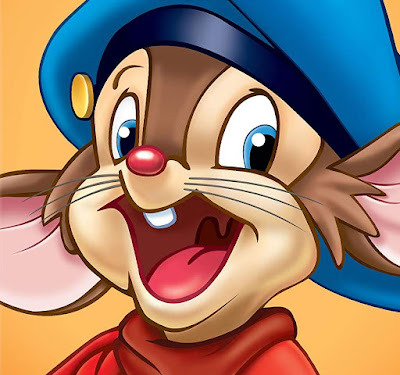