At this current time, a new Hellboy movie has just been released. And it's taken quite a drubbing, in terms of both the general critcal consensus. I have yet to see it, despite wanting to (David Harbour is an actor I like, Neil Marshall is a director I LOVE), so I figured that I could at least check out one or two other Hellboy tales in the meantime.

This particular adventure, Blood And Iron, features the main cast members from the Guillermo del Toro movies, all lending their voices to their characters in animated form (much like the Sword Of Storms tale, which I have also seen, and the super-short Iron Shoes tale, which I have yet to free up three minutes for). The animation style is fun and it's good to just be able to spend a bit more time with these characters again.

But what's it all about? Basically, the BPRD are despatched to investigate a haunted house. They suspect that it's all just a publicity stunt, considering the new owner of the house is a very rich developer who would seem to relish the attention. But it turns out that there's more to the case, and it involves a vampire previously encountered by Professor Bruttenholm. Moving between the present and the past, viewers get to see Bruttenholm finding out about the vampire many years ago, as well as his time convincing others that a small, red, demonic entity could be worth looking after, instead of being immediately destroyed.

Directed by Victor Cook, and Tad Stones, this is an enjoyable distraction for those simply wanting another Hellboy adventure. It retains the essence of the characters, adds some nice backstory details, and moves briskly from one bloody set-piece to the next. Writer Kevin Hopps doesn't seem to have too hard a time putting the script together, a lot of the backstory feels very much like it could have been lifted from many Hammer horror movies, but perhaps it's unfair to think that just because Hopps has done such good work making it seem so easy.

Perlman is good in the central role, although he seems a bit less petulant and grumpy than he was in the live-action movies, and the mellifluous vocal stylings of John Hurt are as enchanting and soothing as ever (maybe that's just me). Selma Blair and Doug Jones round off the central quartet, doing just fine, and the supporting artists all do solid work, with Kath Soucie and Cree Summer getting to have the most fun as the main villains.

It's far from unmissable, and I wouldn't recommend seeking it out for ridiculously inflated prices, but this is a good piece of work for Hellboy fans, with the animation style fluid and nicely in line with the majority of the standard comic art (from what I can see, although I still need to delve in to some of the printed tales). A fun 75 minutes, nothing more and nothing less.

You can buy the DVD here.
Americans can buy it here. 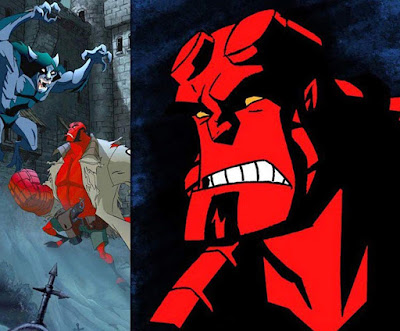