Directed by Jenn Wexler, who also co-wrote the screenplay with Giaco Furino, The Ranger is a modern slasher movie that appears more widely available now after a series of crowd-pleasing festival appearances that marked it out as one I knew I wanted to see ASAP.

Described in almost every review as a punk slasher movie, the plot sees a group of friends escaping to a cabin in the woods after a run in with the law at a music show. The individuals are Chelsea (Chloë Levine), her boyfriend Garth (Granit Lahu), Jerk (Jeremy Pope), his boyfriend Abe (Bubba Weiler), and a girl named Amber (Amanda Grace Benitez). Chelsea used to spend a lot of time in the cabin as a young girl, and she is remembered fondly by the local park ranger (Jeremy Holm). Unfortunately, the ranger isn't so nice to everyone. He has a very strict way of dealing with people he views as disrespectful and troublesome.

Although it is fun in places, The Ranger is a bit too uneven to be a complete success. I mentioned that every review describes it as a punk slasher movie just to say here that I'm not quite sure how that actually works in the movie. Take away those opening scenes and all you have are a bunch of characters who dress kinda punk. And they drive a van that looks like a punk version of the Mystery Machine, I guess. It feels like something that has been thrown in to try and give the film more of an identity that it has, without anything substantial backing it up. Perhaps this is an attempt to make up for the lack of focus elsewhere, especially when it comes to the titular killer, but it backfires, especially for anyone who has enjoyed movies that actually DO feel punk.

The direction is fine, with Wexler doing good work with a bunch of limited resources and money (I assume, because this is not the kind of thing to get millions and millions thrown at it). Where it suffers is in the script and pacing, with the latter particularly problematic in a film with such a brief runtime. This runs at just under 80 minutes, yet the killing doesn't really start until just over the halfway mark, and there's a final act that feels padded out and badly misjudged. The Ranger gets some amusing lines, mainly while commenting on bad behaviour using the various laws and codes he wants people to abide by, but nowhere near enough. This had the potential to be much more fun, and it just isn't.

The acting from Levine and Holm is very good, which makes up for the rest of the cast. It's not that they're terrible, they're not, but they're just not given much to separate them from the group. They're a collective, without enough identity or individuality to help you care for them when the killing begins.

None of this would matter, of course, if the kills were good enough. They're not, unfortunately. There's one great piece of nastiness, but the rest all seems too tame and uninventive. Even the backstory feels slightly lacking, compared to the lengthy history of "killer motivational moments" that we've had over the decades.

The Ranger is not a bad film. It's well made, the cast do decent work, and the premise has the potential to be a lot of fun. It's just a shame that the potential is never fulfilled. This should fly by, from one death to the next, but it drags instead. And a brief slasher movie aiming to entertain horror movie fans should never drag.

Americans can buy the movie on shiny disc here. 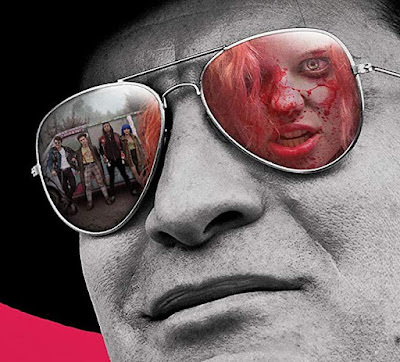