The first animated feature film directed by Michael Dudok de Wit, after many years spent working on animated works ranging from Heavy Metal to  Fantasia 2000, this is a quiet and contemplative drama that somehow manages to be very effective and moving by the time the end credits roll.

The story revolves around a man who finds himself stranded on an island. He tries to leave, of course, but his attempts are unsuccessful. During one such attempt, he encounters a large red turtle. It seems to want to stay near him, which the man doesn't appreciate. He ends up reacting rather violently, although this leads to the shell of the turtle opening up to reveal a woman inside. And so the rest of the film shows the man and the woman making their life on the island a good one.

It's hard to think up much to say about The Red Turtle, which says a lot without seeming to say anything at all (this is dialogue-free for most of the runtime, but I am referring more specifically to the main theme of the film and the impact of the ending, which is bittersweet). It's not a film to throw on if you need what you can get from other, standard, animated fare - gags, characters to be thrown on anything that can be merchandised, lively set-pieces - but it's one to watch when you're in a thoughtful mood, one to let wash over you with the beauty of its simplicity.

The animation is like the content, simple and beautiful. It's also clean and often slightly muted, even more so when scenes move into dream sequences that the main character is having. This could easily have been a live-action film, probably with the red turtle created by computers and placed alongside one main actor, but the animation makes it much more appealing. It has a softness to it, and a feeling that this is the work of a child who has stumbled on to something universally resonant.

Pascale Ferran helped to co-write the screenplay, which really just allows us to watch a condensed version of the lifetime of one man, and it works well. Dudok de Wit directs the material with an admirable lack of any easy "outs" for viewers. He wants you to sit down, be drawn into the story, and patiently watch it unfold from start to finish. Although a co-production with many countries attached to it, the combination of heart and maturity make it easy to see why Studio Ghibli have their logo placed at the start. It may not have their usual Japanese style and elements in place, as the Dutch director was asked to make a movie for them but it certainly feels well-suited to their catalogue.

I'm going to wrap this review up here. It's already longer than I thought it would be. This is not something to really discuss and dissect. It's more like a poem brought to animated life. Not a lengthy poem either. Just a little rhyme that you enjoy because it feels unsophisticated and to the point. 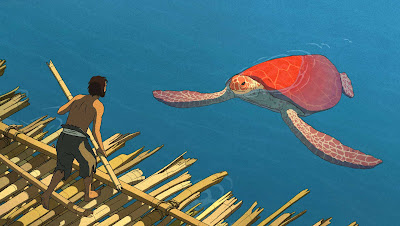