Ahhhhh the '90s. Although I consider myself a child of the 1980s, as I was born in the mid-70s, I tended to develop most of my own taste, as dubious as it is, in the 1990s. I was finding my own TV shows, I was enjoying the grunge music scene, I was obviously an absolute whirlwind of hormones, and I also got into rave music. Yes, some of it is annoying and rubbish, but there are a lot of tunes from that time (and I may regret admitting this) that are still in rotation in my playlists, whether for the gym or just for general liveliness.

Everyone associates rave culture with garish clothing and lots of pill-popping. I never popped pills. I was high on life. And I never wore garish clothing. Okay, that's a lie. I enjoyed the comfort of some Bermuda shorts, and I had one hypercolour t-shirt that was my favourite thing ever. But that's not too bad, considering the variety of t-shirts, shirts, and onesies I have in my wardrobe nowadays.

My one regret was not getting to one of the big raves, with the biggest of the main events, Rezerection, taking place just on the outskirts of my home city. To compensate, I picked up all the cassette tapes I could, from the live shows (featuring sets from DJ Ratty, UltraSonic, all the way to Carl Cox, etc) to the TTF albums, from The Prodigy to standard, slick mainstream packages that compiled hits from the likes of Altern-8, Praga Khan, Utah Saints, and Messiah.

Beats opens with THE classic track from UltraSonic, Annihilating Rhythm, which will prove immediately comforting to anyone thinking this is a film from people who don't know what they're doing. Everything about the film feels authentic, all the way to a bittersweet coda that reveals the future lives of most of the main characters, and that is what elevates it to a low-key kind of greatness.

Cristian Ortega is Johnno, being willingly led astray by his mate, Lorn Macdonald (playing Spanner), and the two do a great job in the lead roles, very natural and believable throughout. Johnno has his mother (Laura Fraser) and potential wannabe-stepfather/policeman (Brian Ferguson) trying to keep him on a better path through life, while Spanner just has his older brother (Fido, played by Neil Leiper) giving him hassle at every opportunity. Ross Mann is a DJ, D-Man, and Cat, Wendy, and Laura are three young women who make the idea of risking major punishment for having a wild night out seem a lot more appealling, and they are played respectively by Amy Manson, Rachel Jackson, and Gemma McElhinney.

Based on a play by Kieran Hurley, who co-wrote the screen adaptation with director Brian Welsh, this is something that needs to conjure up all the right memories and feelings to work, and it absolutely does. The soundtrack choices are spot on, the black and white cinematography allows for a burst of colour to open out your reception to the good vibes at just the right times, and there's a perfect distillation of the feelings you can have for what you view as that one, somehow hugely important, big night out. Some people used to head out every weekend, even every other night if they knew enough people having enough different smaller parties, but there would always be one night that would see you a different person watching the sunrise from how you were as you'd watched the sunset.

I look forward to whatever comes next from director Welsh (and also need to see The Rack Pack, a film he directed about the rivalry between snooker players Alex Higgins and Steve Davis), I am already a big fan of Hurley (having also been lucky enough to see his play, "Square Go", here in Edinburgh last year), and I hope to see both Ortega and Macdonald in some more movies.

In case it wasn't obvious, I loved Beats. Loved it. I was transported to the early-to-mid-nineties, I could recognise so many familiar moments (even that horrible moment when you're hanging with people who have come along accompanied by an antagonistic asshole), and it's a perfect celebration of the positivity of the rave scene, and the beauty of even the most seemingly-mismatched friendships. 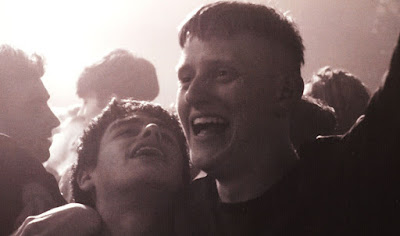