Written and directed by Rob Grant, Harpoon is the kind of black comedy thriller best described as enjoyably vicious. It takes three people, throws them together in a small environment, and starts to allow them to twist the knife into one another. And twist. And twist.

It all starts with Jonah (Munro Chambers) packing up things after the death of his parents. He is visited by his friend, Richard (Christopher Gray). Richard punches Munro in the face because he believes that Munro has been cheating with Richard's girlfriend, Sasha (Emily Tyra). Once that misunderstanding has been cleared up, the three head off on Richard's yacht for a day trip. Tension is still there, as well as a spear gun that is a birthday surprise for Richard.

Framed by the words of an unreliable narrator (Brett Gelman), Harpoon moves deftly between the very funny and the very painful. The truth can often hurt, but so can a swift kick to the balls. The latter will also happen to make viewers laugh. The three central characters show themselves, at various points, to be people who aren't really very nice, which makes their pain ultimately more satisfying, and also more expected as momentum starts to build towards the finale.

The praise must all go to Grant for his script (with some input from Mike Kovac). He's managed to take a simple three-hander of a tale, add some more humour and uncertainty with the help of that sharp narration, and somehow keep things both blindingly obvious and yet entertainingly serpentine at the same time. Everything is there from the very beginning, in many ways, as you are shown the characters, their actions, and main relationship dynamics.

It helps that the main cast all do very well in their roles. Gray is, of course, the one we take an immediate dislike to, being the rich kid who comes onscreen and punches his friend in the opening sequence. Chambers is enjoyably mistreated by Gray, the two of them perfectly illustrating an unlikely, and unhealthy, friendship, and Tyra is a perfect third point in what is set out as an obviously problematic triangle.

Although not as simplistically entertaining as Mon Ami (a 2012 film from Grant, featuring Kovac in a lead role), Harpoon is a similar tale of snowballing events leading up to a finale that looks set to be pretty bad news for everyone involved. It's still just a little bit too slight, and not quite as sharp as it could be, but you can certainly see the growth in Grant as a film-maker, and good to see him recently getting some more praise and attention from genre fans. 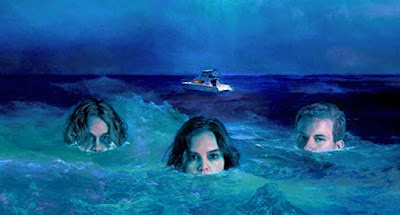