Luigi Cozzi, who wrote and directed this movie (billed as Lewis Coates), must have thought he'd struck gold when it was banned during the infamous "video nasty" debacle of the 1980s because it's yet another movie on the list that doesn't deserve any of the attention it gets from fans (with myself being guilty as charged) looking to seek out the forbidden fruits of the past.

The story is all about alien eggs being smuggled in to New York and the three people who may be able to stop some sneaky plan to enslave America or somesuch nonsense. The three involved include someone who survived a mission that found the first substantial stash of eggs being imported(Marino Masé), a female Colonel (Louise Marleau) and an ex-astronaut who mentioned the same eggs when he returned from Mars and was subsequently mocked and regarded as slightly mad (Ian McCulloch). Oh, when the eggs get to a certain temperature they can explode and make people who get sprayed with the . . .  albumen (????) explode too. Chests burst open much like they did in that far superior little movie known as Alien.

Trying to mix horror with some kind of intriguing detective thriller movie, this film fails to satisfy fans of either type. The main attempt, at about the halfway point, to draw out one main set-piece into something nail-bitingly tense is just undermined by the ludicrousness of it all, and the audio work that seems designed to work against, rather than complement, the visuals.

Cozzi doesn't do too bad when it comes to working with whatever budget he managed to scrape together though. He's certainly better in the directorial role than he is with the writing duties, shared with Erich Tomek (who did much better work just one year later with the very enjoyable Bloody Moon).

The acting is a bit shoddy, to be honest, although it's often entertaining enough. McCulloch is fun to watch, as he was in a number of other movies during this period (and I have heard horror fans speak highly of his way of discussing them with good grace and humour), so it is a shame that nobody else is really reading from the same sheet, as it were. The action and plot is really rather dull in between moments of gut-busting carnage, most of the second half feels like it has been excised from the very weakest Bond movie you could imagine, and even the gore gets dull pretty quickly when it's clearly the same "gag" being used over and over again.

Things do get a bit better in the last 15 minutes or so, and there's a good practical creation that gets some star billing in the opening credits so, added to the fun of the characterisations and the frequent exploding goons, it's not all bad. There will always be others who like it a lot more than I did. For me, it just never rises above average. 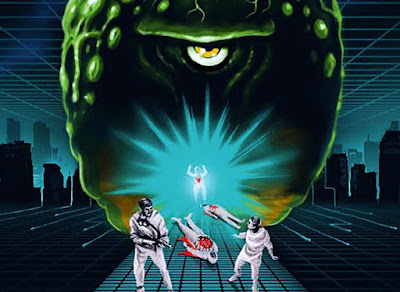