It's very hard to talk about Parasite without going into details that will spoil the experience of a first time viewing. So I am going to, as ever, err on the side of caution. Nobody every got themselves upset over a review that felt a bit too vague, in my experience. So here's the very minimal plot summary. Young Ki-woo (Choi Woo-shik) is told by a friend that he should apply to be an English tutor, a role he is vacating as he heads off to study abroad, for in the wealthy Park household. Once he is in there, seeing the different staff members and potential for money to be made, Ki-woo and his family come up with a plan to integrate them all as staff members. The Park family won't know they're employing a group of related individuals, and the Kim family hope to make as much money from them as possible as they amass the means to move onwards and upwards from the squalor they have been used to for so long. And that's just the start of this squirming and slippery comedy/drama/thriller.

Director Bong Joon-ho, who also co-wrote the movie with Han Jin-won, is a name already familar to fans of world cinema, having helped build the reputation of South Korean cinema over the past couple of decades with acclaimed films such as Memories Of Murder, The Host, Mother, and Snowpiercer. I've seen half of those, and loved them. Yet, despite stiff competition, Parasite is right up there with his best work. It has his usual mix of genre elements, sliding from comedy to drama, and into something darker just in time for a third act that is both completely insane and also completely in line with all that has come before.

Song Kang-ho, as the father of the Kim family, will also be familiar to film fans, especially those who have enjoyed other Joon-ho movies, or the films of Park Chan-wook, and he's the strong heart of the film, even if it takes a while to realise it. His character isn't the smartest, but the family  look to him as they consider the full potential of their opportunity. Woo-shik does well, Park So-dam is quick off the mark too, as his sister, and Jang Hye-jin is the mother, arguably looking to supplant the most valuable member of staff in the Park household, the housekeeper (played by Lee Jung-eun). Lee Sun-kyun and Cho Yeo-jeong are both very good as the Park family father and mother, respectively, while everyone else does exactly what is required of them in their supporting roles. This is a film that works very much because of the ensemble cast.

About as subtle as a sledgehammer to the face, the commentary running throughout Parasite works beautifully because it IS so overt and obvious, reverberating through the material like some kind of shockwave. Attitudes are examined at both extremes, those who feel entitled and those who are more naturally servile, and it's quite audacious of Joon-ho to make his points by showing people literally locked into their roles.

Whatever you have already heard about Parasite, and I hope it is not TOO much, believe the hype. See it as soon as you can. 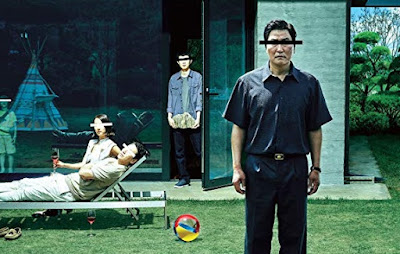