A contender that never really seemed to have a chance in the awards season, Ford V Ferrari came to cinema screens with a small amount of fanfare, but no real way to sell it to anyone other than fans of stars Matt Damon and Christian Bale (and, yes, I went into this film thinking one played Ford and one played Ferrari). That's a shame, because this turns out to be one of the more enjoyable films put forward in various award categories over the past year. It's easy to see why others edged ahead in pretty much every category, and it's easy to dismiss it as a formulaic movie that takes no risks, but that shouldn't take away from the fact that the film deserves to receive a bit more praise than it got (from the response I have seen to it anyway).

Matt Damon is Carroll Shelby, the man who ends up tasked with designing a car for Henry Ford II (Tracy Letts) capable of beating the almighty Ferrari cars that have dominated the Le Mans racing event for many years. The car is only part of the solution though. What's also required is a driver who knows exactly how to get the most out of the machine. That's where Ken Miles (Christian Bale) comes in. But Ken is a racer who doesn't necessarily fit the image that Ford may want to put out there as the winning driver to get results that will also lead to more car sales.

Director James Mangold has a good foundation to work with here, with a smart and sharp script hammered into shape by Jez Butterworth, John-Henry Butterworth, and Jason Keller, and his quality cast. He also shows a great understanding of how to use the technology at his disposal to best display the intensity of the racing moments without making it all feel like a CGI showcase.

Although Bale is as good as you would expect in the main role, he's a man with a very singular purpose. He knows cars, he wants to win races, he doesn't care for whatever else may be happening around him, in terms of the business and PR side. Damon gets to have a bit more fun, knowing when to play the game with people and when to do whatever it takes to protect the man who he knows is the best fit for the car. The supporting cast is also full of treats, from Letts as Ford, to Jon Bernthal as the vice president of Ford, to Caitriona Balfe as Mollie Miles, the supportive wife of Ken. Josh Lucas gets to be the kind of arrogant douchebag that seems to be the highlighted role type at the top of his CV, and he does it so well, and Ray McKinnon is Phil Remington, a team engineer who is also adverse to all of the games being played off the track, his only aim being to help Miles and Shelby make their case with the fastest lap times.

There may be few surprises for those who were already familiar with this tale (I wasn't, I have no knowledge of the history of racecar driving), but there's enough added, in terms of the character development and little fun details, to definitely make this worth the time of even those who think they know the story too well to find it tense or entertaining. Mangold uses a lot of tried and tested tricks to make sure that it is a complete, and completely enjoyable, cinematic experience. 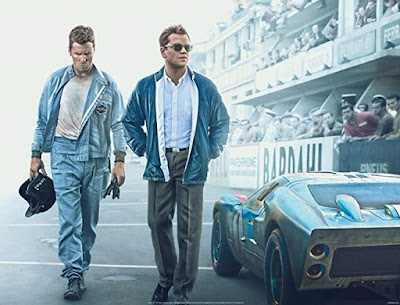