Piercing is weird. There's no other way to describe it. It starts weird, gets weirder, and then manages to get even weirder. Whether you like it or not, well, that's not something you will be able to glean from many reviews. I ended up liking it, and liking it a fair bit, but there were many times when it could have easily just completely lost me.

Christopher Abbott plays Reed, a man with some problems, to put it mildly. He wants to get a prostitute and cause her a lot of harm, ending in death. He ends up having Jackie (Mia Wasikowska) sent to his room. Jackie might be a very suitable victim, or she might end up being something more. And, considering how often we see Reed hearing unusual dialogue from other people who encourage him to follow his urge, it's impossible to really figure out just how much of what we're seeing is real and how much is just how Reed views his world.

The second film from writer-director Nicolas Pesce (I have yet to see his debut, The Eyes Of My Mother), Piercing is an impressively unique piece of work. Although influenced by a variety of cources, from what I could tell, the most interesting "lift" here is probably the music from Tenebrae,  a piece both familiar and yet not instantly recognisable, and one that feels initially jarring alongside the visuals as you know it doesn't belong there . . . but then it starts to quickly belong there. This sums up the approach that Pesce has to the material, originally a novel by Ryû Murakami, and highlights how much effort he puts into allowing something to retain its individuality while also folding in a mass of other interesting touches.

He's helped immensely by his two leads. Abbott performs with the appropriate amount of oddness, viewing the world around him with a mix of disgust, confusion, and mistrust, while filtering the fact that he's determined to claim a victim back into his brain, you can almost visualise his thought process throughout as he says or does things that feed into either his growing security or growing nerves. Wasikowska is perfect in her role, flitting between vulnerable and potentially very cunning and dangerous, and the strange chemistry with Abbott works well. There are some other people onscreen, with the main one being played by Laia Costa, and they all give very good performances of characters as interpreted by the leads.

A film that I can imagine few people absolutely loving, there's enough here to mark it out as something unforgettable, and singles out Pesce as an impressive talent. The boldness of the content, and his approach to it, is admirable, even when it doesn't all work as well as it could. I'll be checking out the other films from Pesce, and I can see myself revisiting this one when I want an atmospheric and visually impressive mindfuck. 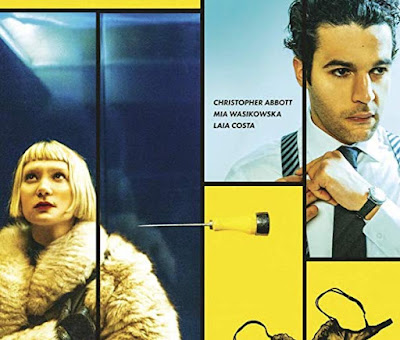