It's the film that everyone was desperate to see, and just as many were as keen to dismiss as yet another example of Martin Scorsese doing yet another gangster film. If you think that then a) you're unfamiliar with Scorcese's eclectic filmography, and b) you are dismissing the fact that every Scorsese gangster movie tends to say something very different. Goodfellas was about how the mob made a man into a monster, Casino was about how the mob built Las Vegas, Gangs Of New York tells of the growing pains there, of course, and now The Irishman comes along, a tale looking back at people who did things they thought needed done, putting themselves into a lifestyle not exactly known for the lengthy lifespan.

Robert De Niro is Frank Sheeran, the alleged Irishman of the title. He becomes a dependable guy who can do jobs for Russell Bufalino (Joe Pesci), and everything gets more complicated with the forceful personality of Jimmy Hoffa (Al Pacino) in the mix. Some houses are going to need painted ("I Heard You Paint Houses" is the original title, from the book by Charles Brandt - the phrase is a euphemism for the work done by mafia hitmen), but who's going to be helping to decorate the walls?

Making use of some imperfect de-aging technology, The Irishman feels every bit like what it most probably is, a drawing of the curtain on the lives that Scorsese has taken interest in over the years. Almost every supporting character is given a quick subtitle that details the age and cause of death. There's a clear statement here. Although the main character is elderly, perhaps living with some regrets, he's in a much more privileged position than many who went into the same line of work.

Clocking in with a hefty runtime of three and a half hours, this is fertile ground for Scorsese to explore, helped along by Steven Zaillian's screenplay. Unfortunately, neither party feels quite at ease with this middle ground. It feels very much like this should have either been pared down by an hour or expanded to create a major TV limited series. You get the usual style and energy from Scorsese, including a nicely varied soundtrack, but he doesn't seem as focused as usual.

While their bodies cannot match the smoothing CGI making them appear younger in certain scenes, De Niro, Pacino, and Pesci all do their usual sterling work, with Pesci a particular highlight. There are also good roles for Ray Romano, Bobby Cannavale, and a super (as usual) Stephen Graham. Much has been made of the fact that there are no main female roles, and Anna Paquin has been singled out for her lack of dialogue, but don't let that take away from the fact that Paquin says a hell of a lot more with some of her expressions than some of the male characters say in their ongoing attempts to keep looking tough and stay on the trigger end of the guns.

If you're a fan of everyone involved then it's hard to see you hating this, even if there are a number of moments that can't help but feel similar, and maybe less impactful, when compared to other classic Scorsese moments. If you assume it's going to be a greatest hits selection of everything that they've done before, and you roll your eyes at the thought of that, then this probably isn't going to change your mind, despite the different heartbeat working throughout every scene. 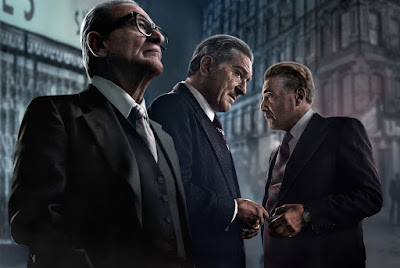