The theatrical feature debut of writer-director Justin Dec, Countdown is the kind of slick teen horror that will either make you roll your eyes or grin and go along with the main premise. I chose the latter option, and am glad I did. One or two notably weak moments aside, this is much better than so many other films released to the same target demographic.

Things start with some partying young 'uns downloading an app, and that app is called Countdown. Countdown tells you when you're going to die. Which is all well and good for those who are given a fairly normal life expectancy. It's not so good for those who are given days, or even hours. And when the clock reaches zero, there's no avoiding your fate. A chain of events lead to a young nurse named Quinn (Elizabeth Lail) downloading the app, being given a very short amount of time left on this mortal coil, and trying to stop whatever force is going to help her shuffle off it. She joins forces with a young man named Matt Monroe (Jordan Calloway), attempting to save both their own lives and that of her younger sister, Jordan (Talitha Bateman).

Okay, it's not very atmospheric. It's not got any decent bloodshed or gore. It adds some comedy into the mix when maybe it was best to leave it out. And it's about an app. The separate ingredients aren't that good. But Dec does enough to give viewers what they want from this kind of thing, a fun time with some decent deaths. Rules are established, but in a way that allows for some ambiguity while the leads figure out the full extent of the danger that they're in, and everything is played out in a way that is, for this kind of thing, surprisingly plausible. Movie plausible, of course, not real-world plausible.

Lail is a decent lead, if a little bit lacking in anything to make her truly memorable, and the same can be said of Calloway and Bateman. Peter Facinelli is a doctor working alongside our lead, and you just know that he's going to either be trouble or get himself caught up in the situation at some point, or both. Then there's P. J. Byrne, almost unbalancing things as a young priest all too ready to believe the killer app, although there's more fun to be had with Tom Segura, playing a phone shop worker treating everyone he encounters with disdain.

There are a number of ways in which this could have been more enjoyable (a bit more nastiness in the deaths, some more twists and turns in the build-up a la Final Destination), and an attempt to play a set-piece in which some characters take shelter within a circle of protection is undone by one character being written to be stupid enough to allow things to be drawn out for even longer, but there are also so many ways in which this could have been worse.

Not one to recommend to hardened horror fans, but an amusing enough distraction for those who don't mind a bit of lighter fare. 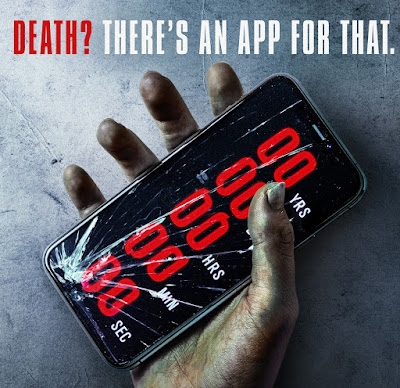