Never you mind those other Terminator sequels, THIS is the one true sequel to the first two movies. This is the timeline to stick with. This is the film that will right any wrongs from previous instalments. That's what James Cameron would like you to believe anyway. And some people might have believed him, there's always a slim chance, but most of us had been burned before, with a lot of the same positive soundbites being used to sell increasingly inferior sci-fi action movies that were always suffering from a lack of Arnold Schwarzenegger.

The good thing is that this will be, for many, better than Terminator Genisys (although that's not a high benchmark to surpass). I still slightly prefer the previous instalment, but that's just me. The other good thing is that this has a decent amount of screentime for Schwarzenegger. There are some more positives, but not enough to quite outweigh the negatives.

Fate has been changed, and humanity may be safe. To a degree. There will still be a war, deadly machines will still want to kill off the human race, but at least everyone may have avoided judgment day, thanks to the actions of Sarah Connor (Linda Hamilton). Which just means that it's time for a new person to become the prey (this time it's Dani Ramos, played by Natalia Reyes), a new protector to help her (an augmented human, Grace, played by Mackenzie Davis), and a newer type of robo-killer (REV-9, played by Gabriel Luna, a terminator that can operate his fluid exterior and metal endoskeleton independently of one another, if necessary). Sarah Connor ends up helping Dani and Grace, as does a surprisingly domesticated T-808 (Arnie).

Tim Miller is the man trusted to direct the action this time around, working from a script by David S. Goyer, Justin Rhodes, and Billy Ray, and something becomes clear within the first 10-15 minutes. This has been created to remind you of how much you love the second Terminator movie. That's all I can think of anyway. There's no other reason to have such poor CGI on display (the first main action sequence in a factory setting is an embarrassment of rich embarrassments), and to kick things off with a sequence that essentially feels like a gauntlet being thrown down that it doesn't deserve to have grappled hold of in the first place.

Things do pick up after the first act, but it's a bit too little too late, and relies on a hell of a lot of goodwill, and NO moments of overthinking things, from the viewer. Paradoxes and illogical moments abound, while characters range from the horribly bland (Dani, the REV-9) to the horribly malformed by the needs of the script (Connor, the T-808). Grace is the high point, which is mainly thanks to the sheer willpower of the talented Mackenzie Davis.

I am struggling to think of those who will find this anything more than a sci-fi action flick with a couple of ridiculous set-pieces (most of the third act is chock full of the kind of action that relies on every viewer not just suspending disbelief, but deliberately forgetting how any physical forces around us actually work). Newcomers won't get the references, those who have enjoyed the series from the first film will wish they weren't getting the references, and everyone will be happy enough if this is the last ever attempt to yet again keep wringing money from something that became irrelevant at least a decade ago. 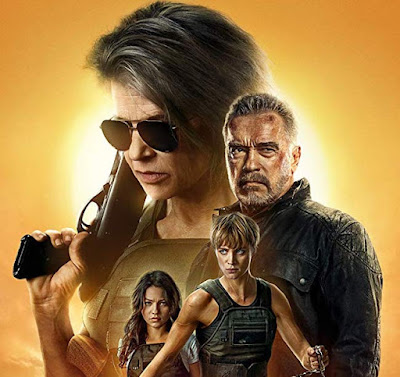