One of those films that would have been rightly forgotten if not for the fact that it could be repackaged and sold on  Jean-ClaudeVan Damme's name, Black Eagle is one of those action movies from the '80s that is both a bit of a mess and, more unforgivably, quite dull.

The plot revolves around some secret device that has been shot down and is now lying beneath the lovely waters that surround Malta. The KGB are keen to get their hands on it, and have a handy tough guy (played by Van Damme) to help them.  America, on the other hand, has a reluctant super-agent (Ken Tani, played by Sho Kosugi) who only ends up taking the mission when he finds out that his young kids have been taken to Malta already. They're being watched by an agent named Patricia Parker (Doran Clark), who seems to be remarkably chipper about her babysitting assignment.

Director Eric Karson only helmed a handful of features, and writers A. E. Peters and Michael Gonzalez only have this full film to their credit, and the reasons why become more and more obvious as the film plays out. This is bad. Not bad in an amusing way, and not bad but saved by the action sequences, it's just bad.

For something so simple, Peters and Gonzalez really get themselves distracted far too often. There are too many scenes featuring Kosugi interacting with his children (played by his real children, Kane Kosugi and Shane Kosugi) and not enough building of tension, or even direct confrontations between the goodies and the baddies.

Karson wastes the potential of his two "leads", although he cannot do much to lift the script anyway, and there are maybe two scenes that showcase some decent fighting moves, which is especially disappointing for those who know what the martial artists are capable of.

I can't say that the acting makes up for the failings elsewhere. Both Kosugi and Van Damme are better with their hands and feet than with their range of emoting, although the latter has shown some decent range in more relatively recent fare, and there aren't many other characters worth bothering about. Clark does well in her thankless role, the younger members of the Kosugi family are at least able to act naturally like the kids they are, and Dorota Puzio plays the villainous female counterpart to Clark (although she does little more than watch the violence occasionally and sleep with Van Damme).

It goes without saying that you can find much better films if you need some Sho Kosugi or Van Damme passing before your eyes, but I would also say that you can find much better films starring some people that you've never heard of, or people who have spent some time on the lower rungs of the fame ladder (Don 'The Dragon' Wilson, Mark Dacascos, Michael Dudikoff, etc).

Here's a disc.
Americans can get a special edition here. 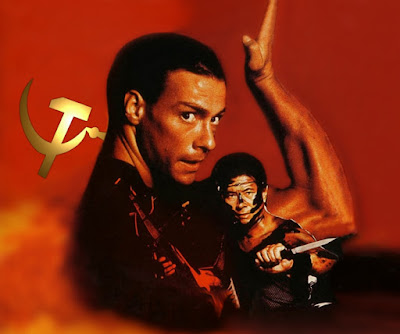