The funniest thing about revisiting the filmography of Jean-Claude Van Damme is finding out how others view his films, and also finding out that some of them weren't the popular hits that the younger version of me thought they were. Take this film, for example. I thought Nowhere To Run was an easy success for JCVD. It wasn't. It made money, but it didn't make lots and lots of money.

The plot sees Van Damme playing an escaped prisoner who ends up being in the right place at the right time for one single mother (Rosanna Arquette) who is being given a hard time by developers who want her to sell her home and stop getting in the way of a potential gold mine (metaphorically). Joss Ackland is the main baddie, but he uses Ted Levine to oversee the actual dirty work, and also makes use of a local law enforcement officer (Lonnie, played by Edward Blatchford).

Based on a script by Joe Eszterhas, Leslie Bohem, and Randy Feldman, Nowhere To Run is simply an updated riff on Shane, with extra moments that allow the leading man to either take his clothes off or ride about on a motorbike and look cool (or allow his stunt double to do that anyway, which is how it appears in a number of scenes). The pacing works well, despite this being far from the most action-heavy of Van Damme's movies from this time, and the characters are developed just enough beyond the paper-thin to help you care about how things pan out.

It helps that the cast all do a good job. As well as the two leads warming up to one another throughout, leading to some gratuitous nudity and sexy sex time, you get decent turns from Ackland and Blatchford, and a scene-stealing performance from Levine, who benefits the most from the script. You also get a couple of great child performances, from Kieran Culkin and Tiffany Taubman, both of whom latch on to Van Damme with an ease and innocence that kids can have within their first encounter with an adult they decide is okay by them.

Director Robert Harmon does decidedly okay work, but it's a shame that he didn't decide to shake things up a bit, either in terms of some more creative acton sequences or in terms of giving more time to character moments for Arquette and Levine, the former underserved and the latter having so much fun that viewers could have been rewarded by having more of him.

Nowhere To Run remains an enjoyable slice of entertainment, and Van Damme exudes enough charisma here to make it feel completely natural that the film was adapted to fit him into the lead role, but it's also very disposable, and ultimately easily forgettable.

The disc be here.
Americans can purchase it here. 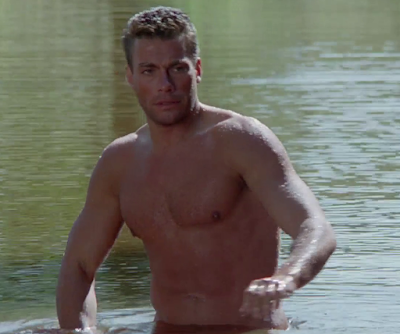