It's the same old story. You travel around the world, supporting your kickboxing brother, watch him rendered immobile and unconscious at the hands of a vicious Thailand fighter, and then beseech a little old man to train you to a level that will allow you to avenge your brother and become known to locals as "Nok Su Kow" (translation = "White Warrior"). Not forgetting to leave yourself a little bit of time for a few drinks and a dance.


Van Damme plays Kurt Sloane, the younger brother to Eric (played by Dennis Alexio). When he sees Eric painfully defeated by the ruthless Tong Po (Michael Qissi), he swears to get revenge. Unfortunately, nobody will train him, and the idea of him becoming good enough to fight Tong Po is laughable to many. Until he is finally accepted as a student by Xian Chow (Dennis Chan). Before you can say "let's fill up the middle section of this movie with one montage after another" you start to get one montage after another showing Kurt progressing through his martial arts education. But will he get his shot at Tong Po?

Like many of the other enjoyable martial arts movies from this time, this is a simple underdog story that pits a talented student who needs guidance against a proper "boo, hiss" baddie. The script by Glenn A. Bruce hits all of the beats that you'd expect, with a lot of good humour here and there, and also makes some predictable mis-steps (the dialogue between the two brothers is pretty cheesy and bad, and a sexual assault is thrown into the script in a way that feels like nothing more than an extra motivator for our hero).

Directors Mark DiSalle and David Worth do good work (considering the filmography of both men, this may remain their best directorial effort) and they seem to know how to just follow the simple script, keep the pace moving along in between training and fight scenes, and let their star do what viewers have paid to see him do.

Van Damme has a lot of fun onscreen, not least of all in THAT dancing scene, and it's not surprising that he would spend the next five years being one of the big headline stars in the action genre. Dennis Chan is a lot of fun as the eccentric teacher, Haskell V. Anderson III is also enjoyable as Winston, a stranger who becomes a good friend to Kurt, and Rochelle Ashana does quite well as Xian Chow's niece, Mylee. Alexio and Qissi aren't anywhere near as good, but they aren't called upon to do much more than look mean and angry most of the time.

It may not be the very best from Van Damme but Kickboxer is definitely top-tier stuff for fans of the star. The fights, the montage sequences, the cheesy/wonderful soundtrack, the splits - this has all of the right ingredients to satisfy your cinematic fast food craving. 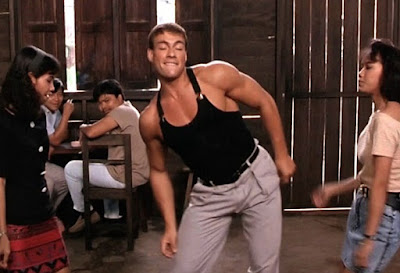