There are so many things that you could mention about Double Team that would (correction = SHOULD) make me nod in agreement with you as we conclude that it's a fairly terrible film. Let's face it, just the fact that it pairs Jean-Claude Van Damme up with Dennis Rodman gives you enough ammunition, and that's just the sprinkling of hundreds and thousands on top of this action comedy knickerbocker glory.

Van Damme plays an anti-terrorist agent named Jack Quinn, a man reluctantly brought back into duty when an elusive criminal named Stavros (Mickey Rourke) reappears and starts to cause no small amount of trouble. Things go sideways, a child dies, and Quinn is knocked out in an explosion. He comes to in a facilty named "The Colony", he's informed that his pregnant wife has been told that he is dead, and he also finds out that the place is nearly impossible to escape from. So he escapes. Which leads him to Dennis Rodman, a handy dealer in dangerous goods who might be the key to helping him track down Stavros and putting an end to his criminal plans.

Although they might not be the best people to watch onscreen, Double Team has one hell of a cast. As well as Van Damme, Rourke, and Rodman, you also get Paul Freeman as a fellow agent/"guest" at The Colony. And, well, those are the only names worth mentioning, I suppose, but what other film can you say features that particular quartet of actors? AND features a scene that has JCVD delivering a sidekick to a tiger? No other film delivers such goodness.

Written by Don Jakoby and Paul Mones, this is enjoyably over the top from start (with Van Damme driving a huge truck through a building as we see him end a successful mission) to finish (a showdown that involves that tiger, a motorbike, and a number of mines). It mixes in elements of James Bond, some buddy comedy moments, and a very entertaining turn from Rourke as the crazy villain.

Tsui Hark may not want to remind anyone that he directed this but he's got nothing to be ashamed of. Okay, I hated this the first time I watched it. I somehow ended up revisiting it and ended up not hating it. Now I quite like it for what it is. Nobody involved is taking things too seriously, with the possible exception of Rourke, and it rattles along at a cracking pace to ensure viewers are never bored.

I still think that someone - anyone - else in the Rodman role could have improved things, and I would have relished the thought of seeing Van Damme interact with someone more naturally funny or cool (imagine if this had been made with a quirky performance from Nicolas Cage in place of Rodman - GOLD), but I am going to be one of the few people nowadays who doesn't think that this is deserving of half of the disdain it seemed to receive when released back in 1997. It's a fun, disposable, action flick.

You can buy the DVD here.
Americans can pick it up here. 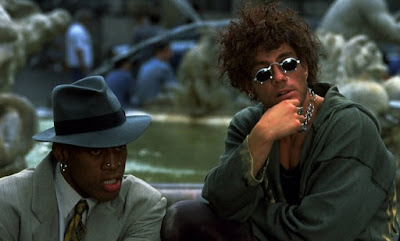