Death Warrant has always been an odd film for me. I didn't really like it when I first saw it, mainly because it felt a bit boring to me compared to other Van Damme vehicles, and it's one that I have often opted to avoid rewatching over the years.

Coming back to it, as an adult who can still usually be as easily pleased as the teenage me, I am still not a big fan. It's not actually boring, although it remains less exciting when compared to other Van Damme movies, but it's certainly lacking something. Grit, extra dollops of cheese, some more fights, one of these things might have helped to make this a better film.

JCVD goes undercover in a prison that has seen a large number of new inmates dying. His main contact is Amanda Beckett (Cynthia Gibb), who tries to investigate from the outside while posing as his wife during visits. He makes a friend in the shape of a prisoner named Hawkins (Robert Guillaume) but he makes a lot more enemies, and some of them are powerful enough to keep him inside until he's been permanently taken care of.

If you put an action star in prison then you get an action movie set in a prison, and that's the main thing to bear in mind here (same rule applies to the likes of Lock Up and Escape Plan). There are some of the expected prison movie tropes but it's almost as if they're being given a nod because they have to be. They don't add to the movie at all, and don't ever feel as authentic as they would in an actual prison movie. The prime example is the moment in which Van Damme first enters his cell and is threatened by someone who states that payment is expected, and payment doesn't have to be made in cash. Van Damme deals with this quickly enough, and viewers know that he's not going to experience the many standard worries, threats and battles that other new prisoners tend to go through in prison movies.

Considering the potential for violence, Death Warrant feels quite tame, which makes it essential that Van Damme does well enough with his actual acting. He does, thankfully, and a decent enough cast surround him. Guillaume is the best of them all, Gibb does her best with a role that doesn't treat her well at all, Art LaFleur is good as the sadistic warden (is there any other kind?), and Patrick Kilpatrick makes a memorable appearance.

Despite being more polished than some of his other films, this never feels as good as any of the others. It is, ironically, the lack of conviction that sinks it. Viewers know that they're not going to see their hero have actual prison problems, which leaves them waiting for the fights, and they're just not as impressive or frequent as they should be (and, quite frankly, the main villain makes a grand gesture so stupid that there's not even a satisfying final battle).

Still fun? Yes. But it's not half as much fun as almost any other JCVD film from this period that you could watch instead.

Pick it up on Blu here.
Americans can get it here. 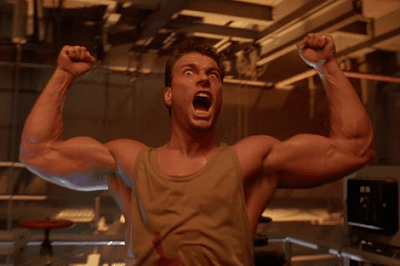