Maximum Risk is another film that gives us two Van Dammes for the price of one. Okay, one of them only appears briefly but the plot of the film centres around the fact that Van Damme is a twin so we can include this movie in the list of films that have more than one JCVD for your money. Unfortunately, it's probably one of the least entertaining, although not without some redeeming qualities.

Van Damme plays a cop who finds out that he had a twin brother when he is called by a colleague to a crime scene that features a corpse of someone who looks just like him. It turns out that his deceased twin brother was involved with the Russian mafia and corrupt FBI agents, and was also engaged to a beautiful woman (Natasha Henstridge). Van Damme decides to deal with some bad guys while getting revenge, and also ensures that he gets some quality time with Henstridge.

The best thing you can say about this movie is that it's not dull. In fact, if only things were crafted with a bit more care, or if more money was available, this could have been another winner in the Van Damme filmography. The script from Larry Ferguson isn't too concerned with anything that doesn't move characters towards the next chase or fight sequence, which would be commendable if those scenes were a bit better than they are. The direction from Ringo Lam is decidedly average when viewers might rightly expect more from him, although the action is at least shot much more competently than many other features that Van Damme would star in over the next decade or so.

The leading man is about as good as he usually is here. He doesn't often differentiate from his usual performing style (certainly not at this stage in his career) which means that fans will be kept happy enough while detractors will keep avoiding his movies. Henstridge makes a bit more of an impression than many of the other women who have starred alongside him, but that's more to do with her being who she is rather than anything inherent in the source material. As for the supporting cast, they're a ragged group of interesting actors, rent-a-villains and unfamiliar faces populating the groups of amassed henchmen. More recognisable names include Jean-Hugues Anglade, Zach Grenier (okay, I recognised him straight away), Paul Ben-Victor and Frank Senger.

Although a relatively painless watch, Maximum Risk isn't one I can imagine a lot of people rewatching (despite the fact that I just did). It's disposable entertainment for a late night when you don't want your brain to do any work, and you may even want to force it to have a rest under the influence of your favourite alcoholic beverage. It's inferior fare, but the star power and a few decent sequences make it just below average, as opposed to truly awful. 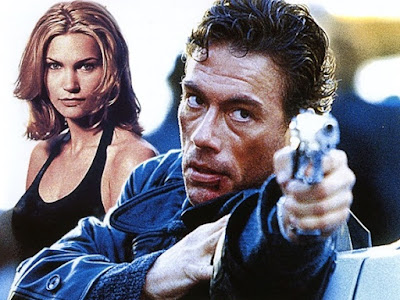