Movies based on videogames are hard to get right. Movies based on videogame beat 'em ups are, arguably, even harder to get right. Videogames don't REALLY have to worry about things like plotting and fully-formed characters, although fans may argue that the best ones do have enough of both, and when they're turned into movies it is often the case that fans are disappointed, either by the casting or by the way in which a plot has been forced to fit around elements that now feel too far removed from the essence of the game. Maybe it's because I was never a huge videogame player that I actually enjoy quite a few of these movies. Mortal Kombat remains my favourite, but I've also enjoyed DOA: Dead Or Alive, and I even quite liked Double Dragon (although it's been years since I saw it so don't take that as a current, informed, opinion). And I find myself revisiting and enjoying Street Fighter a lot more than I ever thought I would.

Raul Julia plays Bison, a maniac who has taken lots of people hostage and demanded an astronomical sum of money. He aims to use that money to build his own empire but there are a number of people out to stop him, including Colonel Guile (Jean-Claude Van Damme), a plucky reporter named Chun-Li (Ming-na Wen), and a pair of reluctant fighters named Ken (Damian Chapa) and Ryu (Byron Mann).

Written and directed by Steven E. de Souza (a man responsible for some of your favourite '80s action movies), Street Fighter is a film that gets a few things right and quite a number of things wrong. And I'm not sure which camp the casting of Van Damme as Guile belongs to.

There's no doubt that this movie is missing the dynamism of the game, as well as a lot of the special moves that came about after much skilled thumb-swirling and button-bashing, so it's almost inevitable that fans were disappointed by it (which is what I remember being the general consensus at the time). Some of the characters feel as they should, Andrew Bryniarski is particularly enjoyable as Zangief, but a lot of them are either near-unrecognisable or given short shrift in favour of time spent with Van Damme doing his star turn.

There's also no doubt (in my mind) that there's still plenty of fun to be had here. The fights may lack any oomph, to use the technical term, but everyone has fun in their roles, the tone is just close enough to goofy throughout, and you get a performance from Raul Julia that stands out as one for the ages. The man may "only" be portraying a videogame villain but, damn, he steals the entire movie, helped by a script that gives him some truly wonderful lines of dialogue to relish. You may one day have a list of a dozen movies based on videogames that you rank above this one, but none of them will have a moment to rival that in which Julia replies to someone who is reminding him of the time he raided their village.

It's not a knockout, but I tend to like this more every time I watch it. Maybe other people will feel the same way, as unlikely as that may seem to some of you. 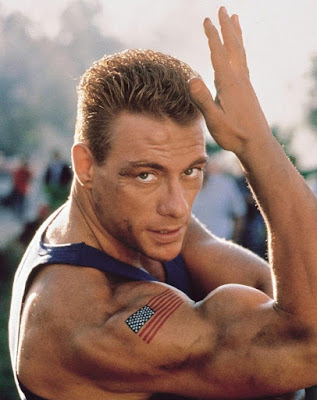