Van Damme returns as Luc, now a normal man after having all of the UniSol implants and tech removed from his body. He works for the company, training new soldiers and keeping an eye on things. One of those soldiers is a mean badass played by Bill Goldberg, and he doesn't like Luc all that much. That wouldn't be a problem, if only the supercomputer running things (SETH, voiced by Michael Jai White, who also plays him in humanoid form in the second half of the movie) wasn't about to turn all super-evil and turn the soldiers against the puny humans around them.

As of today, this is the only film directed by Mic Rodgers (who has carved himself quite a career in the realm of stunt work). That's a bit of a shame, because Rodgers does just fine in the big chair. There's a lot of goodwill to claw back after the previous entries in the series, films that are justifiably ignored by the script (written by John Fasano and William Malone), and there aren't enough action sequences to detract from the relatively low budget, but this isn't a bad way to get things back on track and return some value to the brand name.

Van Damme does just fine in his lead role here, it's a character he is comfortable with and the premise doesn't ask him to do anything too difficult (like emote or convince viewers that he has a degree in bioengineering), and both Goldberg and White bring solid physicality to their antagonists. Kiana Tom has a sizable role, sizable in comparison to other female roles in JCVD movies anyway, and does well enough, and there are supporting turns from the ever-dependable Xander Berkeley and Daniel Von Bargen.

I know that people often go on about the next two films in this series. They say that they're a marked step up and usually recommend people just diving straight in (because they are pretty much standalone action films making use of the UniSol idea). There's no doubt that they're better. That doesn't make this one bad though. It's just . . . not really good.

This is a good way to own the series.
Americans can go for this mix. 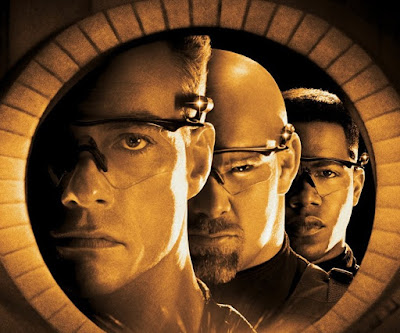