Double Impact is the film in which we found out that the actor Jean-Claude Van Damme likes working alongside best is . . .  Jean-Claude Van Damme. Twins, clones, different timeline versions of himself, there are many plot devices that have been used to give viewers double the Van Damme-age, and it all started here.

Jean-Claude Van Damme is Alex, a nice martial artist who lives with his uncle, Frank (Geoffrey Lewis), and helps out in the running of their business. But it turns out that Frank isn't actually his uncle. And he has a twin brother named Chad, currently living in Hong Kong. Unbeknownst to Alex and Chad, they were separated as babies after the murder of their parents by two evil businessmen (Nigel Griffith, played by Alan Scarfe, and Raymond Zhang, played by Philip Chan). The time is right to get back what rightfully belongs to them, and get some good old-fashioned revenge.

Okay, the process of lining one Van Damme up alongside another may not have been as easy back in 1991 as it is nowadays but there are a lot of scenes here that work well, due in no small part to how well JCVD sells both of the different characters and also their interactions. Alex is the nicer guy, and the martial artist. Chad is a badass who tends to use guns, but can also do alright with his hands and feet when necessary. Director Sheldon Lettich isn't exactly asking for a nuanced performance from his star but things could have still ended up a lot worse.

Lewis is wonderful in his supporting role, at times parental and caring while at other times just wanting to bang heads together and get his two Van Dammes to stop squabbling and fulfil their potential. Alonna Shaw does well as the woman in between the twins, being the girlfriend of Chad and causing a certain amount of jealousy after initially mistaking Alex for her fella, and Corinna Everson makes quite an impression as a tough henchwoman. Scarfe and Chan are the typical bad guys who try to stay hidden behind their wall of muscle, and you can't blame them when that wall of muscle contains the mighty Bolo Yeung.

After their previous movie together, Death Warrant, it feels like Lettich and Van Damme worked together to come up with something much more fun, which this is. The pacing could be tighter, it could have done with some more Bolo Yeung (but what movie starring Bolo Yeung couldn't?), and it felt a bit odd at this point to see Van Damme using guns as much as he was using his martial arts, but this remains a fun time.

Oh, just one more thing, that shot of Van Damme appearing out of the darkness at the controls of a crane cab is superb. It's just a short moment, you'll know it when you see it, but it's SO well done that I felt I had to end this review by mentioning it.

You can treat yourself to Doble Impacto here.
Americans can get their Double in this triple. 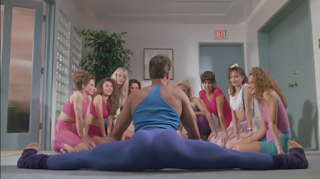