Inferno is one of those odd little movies that somehow gets itself a decent cast, has some decent humour, and has the potential to be a hidden gem. The reason that it never realises that potential lies with director John G. Avildsen, as well as Jean-Claude Van Damme (still struggling to recapture that onscreen charisma that helped him become a star over a decade previously).

Van Damme plays Eddie Lomax, a man who starts the film drunk in the middle of a desert area. He's staggering around and talking to someone, a person who may just be a figment of his imagination, and about to kill himself. His drinking and gun-waving ends up interrupted by some locals who beat him and take a motorbike that we was intending to deliver to his friend (Danny Trejo). This leads to Eddie eventually reaching a nearby town and pitting two gangs against one another while he helps to cut down their numbers.

Another reworking of Yojimbo (which is namechecked at the end, for anyone who misses it while the plot unfolds), Inferno feels very much like it is unsure of where it wants to go. The violence doesn't have the impact that it should, the moments of humour feel out of place, and scenes that skirt close to being sweaty and sleazy are too short to help the overall feel of the film. Writer Tom O'Rourke has fun but I'm not sure that director John G. Avildsen is on the same wavelength, perhaps more worried about the visual style or delivering moments that action movie fans will expect.

Aside from our leading man, the supporting cast here is generally well selected. You get Trejo, of course. Gabrielle Fitzpatrick is the woman who may catch the eye of the lead, and she does okay, but you also get Silas Weir Mitchell, Pat Morita, Larry Drake, and Jaime Pressly, as well as a horribly inappropriate bit of casting in the shape of Vincent Schiavelli playing a Mr Singh.

This should have been more in line with Last Man Standing, but with fists and feet replacing the guns from that film. I think ramping up the impact of the violence and the exploits of the bad guys would have made things ultimately more enjoyable. But it didn't do that. So what we end up with is an action thriller that titillates occasionally with the content (a couple of moments of sudden violence, one main sex scene) but is really playing it safe, for the most part. Casual JCVD fans should find it enjoyable enough though.

You can pick up the disc here.
Americans can get it here. 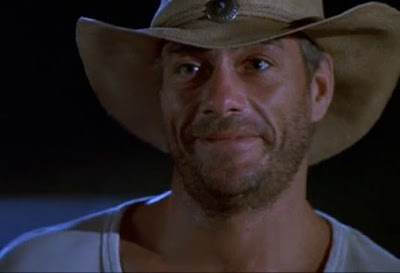