Look, let me be clear, I don't have a dog in this fight. I have never been massively into comic books, with the exception of a couple of fun omnibuses that I had as a child (and the Knightfall storyline for Batman, which remains one of the best things ever), so I am not a person who has to stay in either the Marvel or DC camp. Having said that, it's almost impossible to argue with the fact that Marvel have set the gold standard in cinematic superhero adventures. I had heard good things about Aquaman though, so I was optimistic.

Jason Momoa once again plays Arthur Curry, the half-Atlantean superhero who just wants to live his life peacefully, when he's not crashing into submarines that have been overrun by pirates and beating up lots of baddies. Unfortunately, plans are afoot underwater to wage war against those on land who have been polluting and changing the seas over the years. Those plans are being hatched by King Arm (Patrick Wilson). If only someone could turn up that has the potential to overthrow him and become the rightful heir to the throne. Mera (Amber Heard) knows that Arthur is that someone, even if he doesn't think it himself.

Although it has a runtime of over two hours, the best thing I can say about Aquaman is that it fairly flies by. The pacing is perfect, with the set-pieces nicely spaced out in between moments that showcase some fun exchanges between Momoa and Heard. Director James Wan, working from a script by David Leslie Johnson-McGoldrick and Will Beall, has a knack for making the potentially ridiculous into something enjoyable and entertaining, and he does it here once again.

Momoa is great in the lead role, Heard does well alongside him, and Wilson is suitably cold and dangerous in his villainous turn. Alongside those main players, you get some decent moments for Willem Dafoe (an advisor to Wilson but his loyalties may still like with Momoa), Nicole Kidman (being enjoyably badass in her few scenes), Temuera Morrison (the human father of Arthur), Dolph Lundgren (being Dolph), and Yahya Abdul-Mateen II as an extra villain, Manta, seeking revenge.

I can see why some people really enjoyed this, and why some were saying it was the best DC film yet. The fun parts are more . . . fun than most of their live-action output has been so far. The world-building is impressively epic, a lot of lovely details are scattered throughout every scene, and the action beats aren't all dark and gritty. But all of that comes at a price. For every gorgeous moment (and few are more aesthetically pleasing than a scene in which Momoa and Heard fight back some dangerous fishmen as they dive into the depths of a dangerous underwater trench) there are many that aren't. Either due to the screen being too busy or just some bad cinematic choices, far too many scenes are just messy. People can't always use the right eyeline when it comes to looking at whatever is supposed to be in front of them, some of the design work is unintentionally laughable, and so much is made snazzy and complicated when it could so easily have been kept clean and simple.

While this is far from the best of the recent DC movies, at this point I am tempted to pick Suicide Squad as my own favourite, and to hell with the adverse reactions (although Batman Vs Superman: Dawn Of Justice got more right than wrong), it's also not the worst. That honour stays with Man Of Steel for a little while yet (although, for the sake of perspective, I rate both that movie and this one the same, with all of the others just edging a point ahead).

Here's a 3D disc.
Here's one for Americans. 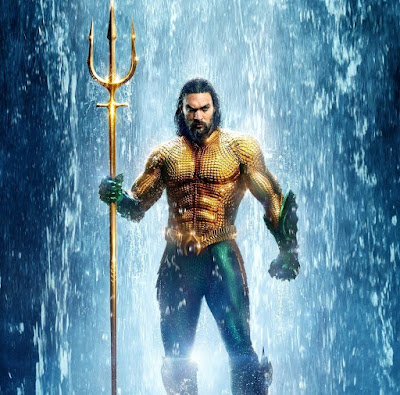