NOTE: This review originally appeared over at Flickfeast.co.uk.

I came out of Berberian Sound Studio and immediately thought to myself, “I hope that others enjoy that movie as much as I did and I hope that I can get away with referring to it as almost the anti-Artist”. That movie was all about the good old days and how visuals could still carry a movie whereas Berberian Sound Studio, as you might be able to guess, reminds you of the importance and effectiveness of sound. In its own way, it’s as much a love story to the film making process as The Artist was. As an additional bonus for horror fans, the movie also comes across as a love letter to the great giallo movies of yesteryear and of the Euro-horrors that were often so feverishly sought after for their mix of style and nastiness.

Toby Jones at last gets the leading role of his career and is excellent as Gilderoy, the sound engineer who finds himself way out of his comfort zone as he tries to mix the audio for an Italian horror movie. Considering his past work, this is a very different and unusual job for him but the director seems to have faith in his abilities and needs the best people available to complete his work of art, a work of art that happens to include plenty of death and someone having a red hot poker placed where a red hot poker should never be placed.

Nothing is seen in Berberian Sound Studio, nothing really bad anyway. The nastier moments are described or played out by sounds or both (an early scene in which Toby Jones is shown some footage accompanied by the sound of men breaking up watermelons is superb, and sets the tone for the whole movie once a piece of the broken melon is then handed over to the main character).

Writer-director Peter Strickland has created something here that’s quite sublime. I, personally, found it to be a much more effective homage to the Italian horrors I have known and loved than Amer (though I’m sure a LOT of people will disagree with me on that point) and the fact that I left after the end credits rolled with some elements I couldn’t quite figure out was not a problem in the slightest. Do be warned – if you want a tidy horror movie that explains everything to you then this film is not for you. It’s a mood piece, yet it’s a mood piece that expertly blends horror with humour with a real sense of love and respect for the work it is showing.

The cast are uniformly great. Toby Jones may shine in his leading role but Tonia Sotiropoulou and Susanna Cappellaro are both superb and Cosimo Fusco and Antonio Mancino bring a mix of laughs and subtle menace playing, respectively, Francesco and Santini.

I highly recommend this to all horror fans because even if you don’t end up loving it as much as I did then I’m sure you’ll enjoy seeing something so unique.

You can buy yourself a shiny disc here.
Americans can buy it here. 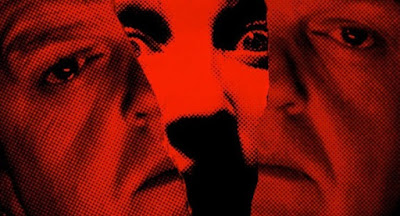