If you simply go by the premise of The Wedding Banquet then it would be easy to expect either a farcical comedy or a hand-wringing drama. It's all about a young man (Winston Chao) who marries a woman (May Chin) in order that she can get her green card and he can placate his parents, and divert them from the fact that he has been happy in a gay relationship with his partner (Mitchell Lichtenstein) for quite some time.

Yes, there are a couple of obvious films that you might already be thinking of. Let me assure you, The Wedding Banquet is not in line with those films. There are moments of comedy here but this is more about the tension created, and the lengths that people will go to in order to hide their true identity from their parents, especially with the extra weight placed upon individuals born into a culture that at times makes more demands of them.

Director Ang Lee, who worked on the screenplay with Neil Peng, and also James Schamus, does start things off in a very lighthanded way. It all seems quite easily doable, and the central characters seem to think that they can get the whole thing over with and then get back to their everyday lives once everyone is happy. A deceit this big, however, isn't just thrown together, carried out, and then forgotten about for the rest of your days. It takes a toll, on the deceivers and those being deceived.

The performances are perfect throughout, with Chao, Chin, and Lichtenstein all getting some great moments here and there, but it's Gua Ah-leh and Lung Sihung (playing the mother and father, respectively) who somehow ending up stealing many of the scenes. Considering how they enter the movie as the main obstacles in the way of happiness for our leading male characters, it's surprising to see how they develop through the film. The writers take care to show that these elders aren't necessarily as close-minded as some may think, but they also have even more weight on their shoulders than anything they pass on to their own children. It's a cycle, but one that may be changed slowly and surely, over time.

Despite being only the second feature from director Lee, this already has signs of his consumate skill. His deft blending of genre elements, his ability to pace things perfectly without it ever feeling too slow, and his general view on the world (able to look forward without forgetting everything that came beforehand). It may not be as beautiful as his other movies but that feels, at least partially, dictated by the content of the film.

I've probably seen just over half of Lee's filmography at this point. Not one of them has disappointed me.

This is a fine set worth picking up, for the price.
Americans may want this blu. 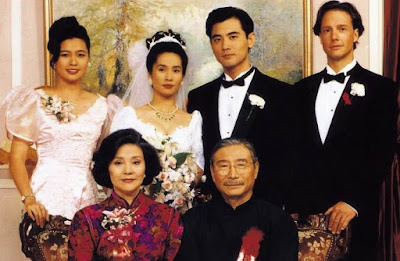