Harold Lloyd stars as Harold Lamb, a young man who is heading off to university and wants to become the most popular guy there. He plans to do this by emulating the lead character in a new movie that he has decided to take notes from. All seems to go well, but that's only on the surface. Harold doesn't realise that most of the people around him view him as a joke, which saddens the young woman (Peggy, played by Jobyna Ralston) who he seems destined to end up with.

I have championed Harold Lloyd for a number of years, and will continue to do so for a long time to come. I have fond memories of his work, having been exposed to numerous clips of his comedy when The Harold Lloyd Show (I THINK that was the name of it, but it could have been something like Harold Lloyd & Friends) was thrown into the TV schedules to fill up timeslots during the holiday periods. He may not have hit the dizzying heights of Chaplin or Keaton but Lloyd managed to market his nebbish and nerdy persona in films that remain impressively smart, and (most importantly) very funny, even today.

There are numerous credited writers here (Sam Taylor, Ted Wilde, John Grey, Tim Whelan) and two directors (Fred C. Newmeyer and Sam Taylor). I'm not familiar with other work from them, and I won't say that they stamp their mark on this, which is a Harold Lloyd movie, first and foremost, although I have to give a mention to the technical achievement of the third act, which involves a lot of camerawork and movement that was a lot harder to achieve back then than it is nowadays.

Whether he's doing a little jig as he introduces himself to everyone or socialising at a party while his suit starts to unravel, piece by piece, Lloyd is as great as ever in his role. Ralston is very sweet, playing "the kind of girl your mother must have been", according to the title card, and Pat Harmon is good fun as the football coach (the grand finale is an important football game that Lloyd wants to be part of). Elsewhere, Brooks Benedict, Hazel Keener, and James Anderson do fine in their roles, and Joseph Harrington helps the hilarity as the poor tailor trying to help Lloyd keep his suit on in the aforementioned unravelling scene.

Using a template that really hasn't changed much over the past 90 years, you could view this as the revenge of one nerd, Lloyd keeps viewers on his side as he strives to fit in with a crowd of people who probably don't deserve his company. If you're new to his work then the set-pieces make this as good a place as any to start, and a lot of the title cards add extra laughs, whether they're explaining the university as a great football ground with a college attached or telling us that football practice is where men are men and necks are nothing. Then you can also check out his other movies and eventually come to agree with me that he deserves more love.

This set is a bit pricey, but here's the link anyway.
Americans can pay even more here. 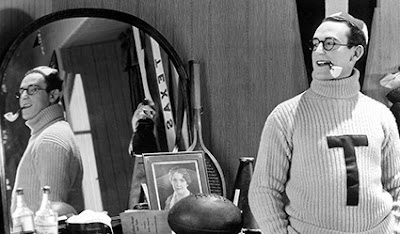