Let's all be honest with one another, The Meg should have been advertised as "Stath vs Shark" because that is what everyone is paying to see. The shark in question may be a megalodon but that doesn't mean it has an advantage over the mighty Stath.

The plot is fairly simple, of course. Some deep sea explorers go even deeper than they expected, penetrating a cloud layer that hides a potential whole new ecosystem, and maybe even a new species or two. Unfortunately, their exploration gains the attention of a humongous killer shark (the meg of the title), and the majority of the movie is spent with the humans trying to avoid becoming fish food while they figure out how to destroy the monster.

Yet, whatever else is thrown onscreen, The Meg is all about Stath vs Shark, and it is in those pure moments that the film comes closest to being as entertaining as I wanted it to be. Stath uses his courage and smarts to outwit the killing machine, often escaping by the skin of his teeth (or, indeed, the skin on the soles of his feet as the shark bites the water just inches from him).

It is just a huge shame that the rest of the film doesn't come close, hampered by pedestrian direction from Jon Turteltaub, a lack of much-needed gore and bloodshed, and a script that makes the mistake of thinking viewers need fleeting attempts to be earnest in between scenes of a big shark out to chomp everything in its path. The novels by Steve Alten may be a lot of fun, although I haven't read them so cannot comment definitively on their quality or entertainment factor, but writers Dean Georgaris and Jon and Eric Hoeber are unable to shape and polish what should have been an easy "win".

It's hard to fault the cast, who work with a script that is constantly undermining them with poor dialogue and a wildly uneven tone, but it's also hard to forgive everyone when compared against those who pitch their performance just right. Statham does well in the lead, which is a saving grace, and he's almost matched by Rainn Wilson, playing the required douchebag of the film (although, to be fair, he isn't depicted as irredeemably bad, he's just not half as smart as he thinks he is). Ruby Rose, Cliff Curtis, and Page Kennedy all do quite well, as does the little girl playing young Meiying, the one child amongst the adults. Those faring much worse include poor Li Bingbing and Winston Chao, both suffering when involved in the scenes that try to be more earnest, and also Jessica McNamee and Robert Taylor.

There are fun moments throughout, and the whole movie is saved by the timing of the set-pieces, but The Meg is another big, dumb blockbuster that proves that size isn't everything. Great CGI and special effects can't make up for the laziness of the jump scares, the outright laughable dialogue, and the fact that the characters are so paper-thin that I'm amazed they don't disintegrate as soon as they come into contact with the seawater.

The Meg will be surfacing here.
Americans can give it a wave here. 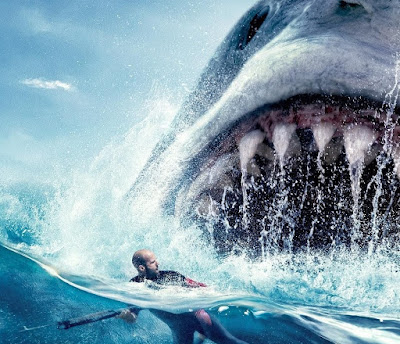