You all know how the game of Truth Or Dare works. People take turns. You either have to tell the truth or perform a dare. The truths normally stem from embarrassing questions about who you have a crush on or what you've done in your sex life, the dares can range from attempts at limbo to making out with strangers to, well, whatever your crowd thinks is going to test your mettle.

Truth Or Dare works pretty much the same way in movie form, except it's anyone around you who can tell you when it is your turn, the truths exposed can be much more damaging, and most of the dares are deadly.

That's really all you need to know about this glossy horror film aimed squarely at the teen market (there's a bland and attractive cast, a lack of any real gore or bloodshed, and a repeated special effect that, as so many others have already pointed out, simply looks like a quirky photo messenger filter). It's not bad - says the man who remains, at times, one of the most easily pleased viewers you could hope for - but it doesn't do enough to keep most horror fans happy, aside from those who may be very new to the delights of the genre.

There's nothing inherently wrong with Lucy Hale (who plays the nominal lead character), Tyler Posey, Violette Beane, Hayden Szeto, or any of the other young cast members. They're just far too easy to forget as soon as the end credits roll. In fact, I'll go so far as to say that it took me a good 15-20 minutes to start identifying most of the individuals separately, instead treating them as one mass of potential victims without any personality until one or two had been pushed off the mortal coil.

There's also nothing majorly wrong with the direction from Jeff Wadlow. He doesn't ever present things with any style or panache, but he shows a basic level of competence, making the film a relatively painless experience (in good and bad ways), helped along by the pacing.

The biggest problem here is the script, and the essentially juvenile nature of the central premise. There have, of course, been other movies based on childish games, but there are some games that are often carried through to adulthood (even if we should know better) or that we can look back on with fond memories of the time when we could be more innocent/idiotic/delete as applicable. Truth Or Dare just isn't one of those games, and I'd be very interested to hear back from anyone who thinks otherwise. It's a game expressly designed, it would seem, to drag people out of their shells, and maybe even get them some heavy petting. Turning it into a tame teen horror means that you end up with something that just isn't all that much fun. Writers Michael Reisz, Jillian Jacobs, Christopher Roach, and Wadlow let down both the cast and the viewers, eyeing up the biggest possible audience demographic without doing enough to truly please anyone in it.

Lots of people will sneer at this, and some will absolutely hate it, but it's far from the worst example out there of the kind of horror that doesn't show off the genre at its best but does make enough money at the box office to potentially fund three or four other genre movies, and one of those may even appeal to more than just teens.

Pick up the shiny disc here.
Americans can buy it here. 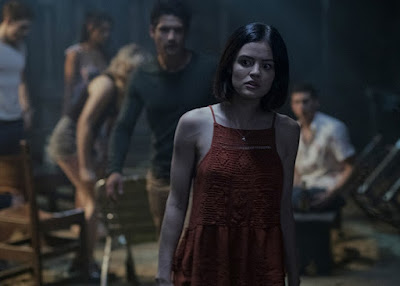