This review originally featured at Flickfeast.

Although there were a number of anthology movies before it, Dead Of Night often feels like the first. That’s partly due to the fact that it came along some time before the likes of Amicus made such an impact with the format, and partly due to the fact that a few aspects of the movie (particularly the framing device and a couple of the main tales) have proven to be so influential over the years.

With four different directors involved, and numerous writers (John Baines and Angus MacPhail get most of the credit for the actual screenplay, but E. F. Benson and H. G. Wells are responsible for some of the source material), the consistency throughout is astonishing, both for the time and also for the format. The only weak spot in the film, a tale of two rival golfers, is itself not a bad little segment to enjoy. It’s just not as good as the others.

Anyway, let’s start at the beginning. Mervyn Johns plays Walter Craig, an architect who starts to get serious deja vu when he pulls up outside the Foley home. Meeting everyone inside, including a Dr. Van Straaten (Frederick Valk), he soon tells them of his feeling. While he tries to explain his unease, and also offer up one or two predictions, the people around him decide to share their own peculiar tales. Anthony Baird is a racing driver who survives a bad crash, only to then have visions of a hearse driver telling him “room for one more inside”. Sally Ann Howes is a young girl who has a spooky encounter during a game of Sardines. Googie Withers is a housewife who accidentally buys a strange mirror for her husband, one that reflects a dark moment from the past as opposed to his usual surroundings. Basil Radford and Naunton Wayne are those aforementioned golfers. And the good doctor himself has a tale to share, one of a ventriloquist (Michael Redgrave) who seems to be terrified of his own dummy. Meanwhile, Mr Craig seems to be spot on with his predictions.

An undeniable classic of the genre, this may suffer slightly from how dated it is, and how everything plays out in the company of some wonderfully unflappable Brits (stiff upper lips, and all), but it’s an absolute must-see for fans of the horror genre, and fans of anthology movies. The atmosphere throughout, although punctuated by many lighter moments, is one of growing unease, and even dread. Viewers become just as agitated as the central character, curious as to how things will pan out and what explanation there might be for the whole set of circumstances. The structuring is also excellent, with the best saved for last in a one-two punch of the ventriloquist tale and the final act of the framing story, and certain scenes remain powerful, nightmarish, stuff. Age may have worn away some of its effectiveness, but this is still a thoroughly deserving, and rewarding, horror classic.

Get yourself a shiny version of the film here.
Americans can get the same disc, but here (if multiregion-capable). 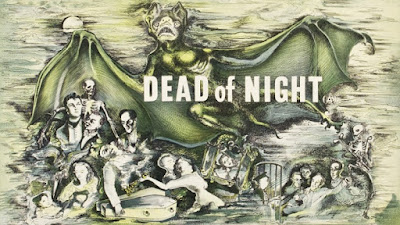