There's very little original in Father Of The Year. Even the title feels very familiar. It's another Happy Madison production, which means you get the usual crudity and silliness, and the usual selection of familiar faces (including David Spade in a main role).

Spade, stretching himself to the very limit of his acting abilities by attempting to maintain an accent (Boston, I think) throughout, plays the drunk and decrepit Wayne, a fully-fledged loser of a man who has somehow managed to have a son on the verge of great success. That son, Ben (Joey Bragg), is home to visit before he heads off for his new life in New York. He is accompanied by his friend, Larry (Matt Shively), and things start to get difficult when Ben and Larry start to discuss which of their fathers would win in a fight. Larry's father, Mardy (Nat Faxon), is quite the passive individual, but that doesn't matter to Wayne when he hears about the argument.

Am I going to tell you that I didn't laugh at Father Of The Year? No, I am not. There were some moments that amused me, but more because I am easily amused than any great crafting of comedy on display. I am sure that many more people will watch this without the shadow of a smile passing across their lips but I chuckled on a few occasions, particularly during scenes that involved Faxon.

Director Tyler Spindel, who also co-wrote the screenplay with Brandon Cournoyer, shows no interest at all in the characters or the environment in which the gags take place. The script is juvenile and careless, with an unearned turn in the final act that is based upon the ridiculous idea that Spade's character is an idiot who is also actually a good man (except, spoiler alert, he does very little to actually show that).

I've already mentioned that I enjoyed the scenes with Faxon more than others, Spade is bearable in his role (IF you can bear him in any role, and I know some people can't), Bragg and Shively are both fine in their roles, and the screen is at least brightened up whenever Bridgit Mendler is onscreen, saddled as she is with the role of the hometown crush that Bragg may try to reconnect with. Mary Gillis is the only other cast member worth mentioning, playing an elderly woman who has her sights on Shively's character (the younger character sleeping with a much older woman is a fairly common trope in the Happy Madison comedies).

Fans of this type of film will know what they're getting, to some degree, although this is worse than a lot of other, easier, films you could choose to kill time. And I don't imagine anyone ever wanting to revisit it.

This is still the best David Spade movie. Buy it here.
Americans can get a nice llama/Kronk set here. 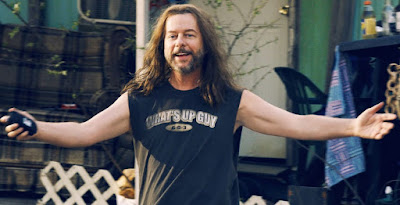