Three Kings remains one of the best films from director David O. Russell, helped by a great cast and a fun script that generally updates Kelly's Heroes and adds more relevant politics and modern views on warfare. It's a film infused, at least initially, with cinematic cool that manages to walk a tightrope by sprinkling cool moments here and there without ever making the environment or war itself seem cool in the slightest.

George Clooney is Archie Gates, a soldier in Iraq as the Gulf War starts to wind down. He ends up leading three men (MarkWahlberg, Ice Cube, and Spike Jonze) on a hunt for gold stolen from Kuwait. They want to steal the gold for themselves, allowing them a very comfortable life when they get back home to America. But as they set out to execute their plan they encounter a number of people who need their help. Trying to ignore them becomes more difficult after they witness what can only be desribed as a ruthless execution.

Based on a story written by John Ridley, Three Kings is almost a perfect look at machismo and how easy it can be to undercut that machismo. The biggest and strongest soldier can be caught and tortured, can be turned into a weak invalid by one bullet, and can be killed at any moment, by a landmine or a gun-wielding enemy, or even an ally making a mistake. The dialogue succinctly captures the essence of the central characters and how the war has sharpened their senses in some ways and yet also dulled them in others. There's no room for complacency, but that's not to say that complacency is something they are never guilty of.

Clooney gives one of his many winning performances, a perfect fit as the guy who comes in and takes over leadership of the three men (who only know where the gold is because they happened to find a map stuck in the posterior of a prisoner). Ice Cube is also very good, and Wahlberg and Jonze both do well, the former playing someone who can posture with the best of them and the latter playing someone wishing he could posture like his buddy. The supporting cast also features Cliff Curtis, Nora Dunn, Jamie Kennedy, Said Taghmaoui, Mykelti Williamson, Holt McCallany, and Judy Greer, and not one of them puts a foot wrong. Not even Jamie Kennedy.

Not quite all things to all people, Three Kings at least gives it a damn good try. It has enough standard soldiering to please those looking for a war movie, it has a nice line in wry humour to please those after a particular style of comedic entertainment, and it has enought thought-provoking moments regarding the politics of war, in general, and the situation in Iraq to please those who want a bit of depth to their slick entertainment.

20 years old next year, this holds up as a fantastic modern war movie, one you could nicely line up alongside Buffalo Soldiers and Jarhead for a smart and amusing triple-bill that reflects on the madness of modern life in wartime without taking anything away from the individuals affected by it.

Get it here.
Americans can buy it here. 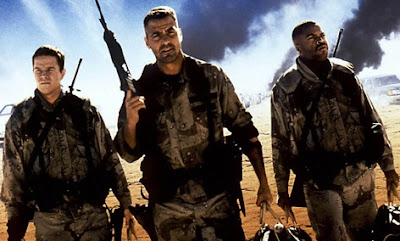