The more I have thought about Predestination, the more I can overlook the flaws. It's an interesting film that is easy to forgive mistakes in because of the story it is trying to tell. I mention it now because in my review, written after my first viewing, I claimed that it was the weakest film from the Spierig brothers. That may still be the case, but that doesn't mean it's a terrible film, by any means. Actually, I should say that it WAS the weakest directed by the Spierig brothers. That title has now been taken by Winchester, and taken fairly easily.

This horror movie is all about the famous Winchester mansion, a sprawling home that was always being developed and enlarged at the request of troubled owner, Sarah Winchester (Helen Mirren). Mrs Winchester was the widow of the man who manufactured the Winchester rifle. Believing herself to be cursed by the spirits of the many people who died at the hands of that gun, Mrs Winchester would come up with bizarre ways to confuse spirits (stairs that lead nowhere, decoy rooms, doors and windows in odd places, etc) and this film explores the house, and her character, by depicting a visit from a doctor (played by Jason Clarke) who is to determine the mental state of the widow.

There's a great story to be told about Sarah Winchester, her life, and the mansion that she wanted to keep adding more and more rooms and features to, and I encourage everyone to check out the wonderful Sarah Winchester, Phantom Opera, a short film from 2016 that mixes the story with ballet in an effective and beautiful way. This film, sadly, feels like it doesn't even begin to scratch the surface of things.

The script, written by the directors and Tom Vaughan, is decidedly . . . limp for most of the runtime, with uninteresting character moments punctuated by well-signposted and ineffective jump scares. That would be easier to overlook if the brothers were once again working with their usual cool visual style, but even that side of things proves to be disappointing. Everything is competent, which saves the film from being unwatchable, but flat and unimaginative. In fact, it's the combination of the weak script and surprisingly weak and uninspired direction that undermines the handful of decent moments you get throughout.

Cast-wise, Helen Mirren is fine in the lead role, Clarke is adequate, and Sarah Snook (playing the niece of Sarah, named Marion MArriott) does okay, I suppose, but every single member of the cast is ill-served by that script, a creation that seems to have been dashed together with no real care or thought given as to how the story could be made more interesting and more focused without having to lead viewers to a cliche-ridden and preposterous finale.

As a horror movie fan, I know not to put too much stock into the words "based on actual events". I know that it's a licence to scare people even more, allowing them to think that something really happened when the only grain of truth in a film might be, for example, that the family living in some supposedly haunted house did once have a milkman named Terry, but it's frustrating when a story as good as this one is mishandled so badly.

You can buy Winchester here.
Americans can get it here. 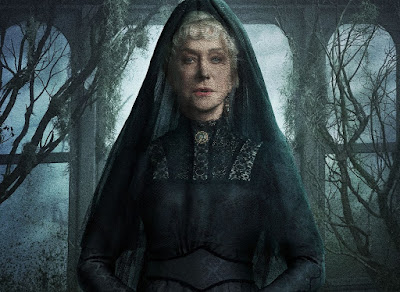