Netflix And Chill: The Funhouse Massacre (2015)

A deadly clown, a cult leader and his deranged daughter, a dentist more interested in creating bloody cavities than fixing teeth, a cannibal, and a "taxidermist". That covers the main cast of villains showcased here in The Funhouse Massacre. You also get a couple of cops, one competent and one a bit of an idiot, and a mix of film geeks, a pair of oversexed lovers, and a guy pining for the lead actress.

The plot is quite simple. A bunch of friends decide to head along to a Halloween haunted house affair. They want frights and fun. Unbeknownst to them, the staff of the attraction have been removed/killed off by a number of insane killers who are set on turning the funhouse into a slaughterhouse. With all of the blood and guts already on display, it's the perfect cover.

Written by Ben Begley, who co-developed the idea with Renee Dorian (and both writers have substantial roles onscreen too), The Funhouse Massacre is pretty much a perfect example of how to do this kind of thing. I'm not going to waste my energy trying to convince you that it's some sort of modern classic, you can happily get on with your life if you don't ever manage to have this on your viewing list, but it's a fun film that keeps things moving, and bloody enough, to make it easier to forget about all of the implausibility and silliness of it all.

Director Andy Palmer does what he can to make everything look as good as it can be, considering the budget. There's some great work done by the art and design department, a few enjoyably gross death scenes, and general savvy use of limited resources. It helps that the villains all have decent gimmicks too, allowing them to turn any room that they are in into a focus for their deadly personalities.

The cast all do well enough. Scottie Thompson and Begley are the main cops, and Dorian is the nominal leading lady, but this is a film all about the baddies having a big night of fun, and they are the ones who make the strongest impressions. Jere Burns is a cult leader who controls the others, as part of his grand plan, Candice de Visser is "The Stitch Face Killer", Clint Howard is the taxidermist, E. E. Bell is a cannibal, Sebastian Siegel is a crazy dentist, and Mars Crain is a hulking psycho clown figure. Something for everyone there, I think you'll agree. There are also fun cameo roles for Robert Englund and Courtney Gains.

Unlike many other horror movies that tend to try too hard in their attempts to be knowing and hip, The Funhouse Massacre gets the balance just right. It has moments of comedy, but they come from the charcaters more than the dialogue (one or two lines/references aside), and it makes use of the killer archetypes in a way that helps to throw everyone off balance as they start to see real horrors unfold before their eyes, because they are so familiar that they cannot possibly ever be happening for real. Unfortunately, that familiarity also stops the film from becoming great, but it's an easy one to enjoy if you're after a disposable bit of fun. 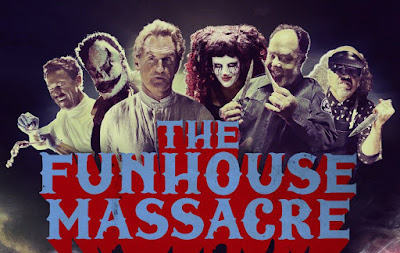