People often think that I am disrespectful because I don't seem to automatically give respect to those who served in a military force, and often helped major countries defeat major enemies (to put it mildly). I have to remind people reading this that I actually DO respect many who served in the military. I just tend to believe that putting yourself into that life doesn't automatically give you that respect. No matter who you are, respect is still earned, whether by the soldier who follows orders and gets results or even by the soldier who refuses an order because he has more recent information that changes the situation. Many military personnel are great, brave people. Some aren't. As in every walk of life.

I felt the need to clarify this now, at the risk of some disagreement and potential backlash, because Erase And Forget is all about an ex-military man. He's a controversial, interesting, complex, man.  I am not sure that I would like to meet him in any situation in which he might be angry at me. I am not sure that I would ever want him to read this blog. Because I am pretty sure that he would know twenty different ways to kill me before reading to the end of this paragraph. But I am sure that I respect the man, as flawed as he is.

That man is named Bo Gritz. He was the inspiration for Rambo, "Hannibal" Smith, AND Colonel Kurtz, and if you head off now to check the list of honours that he received for his military service then it will take you a good few minutes to read through them all. After his time spent serving his country, Bo has undertaken a variety of ventures. He ran as a Presidential candidate, he has taught numerous classes on security and defence and tactics, he has been involved as a negotiator in between the police and individuals that he thought he could connect with, and he has even tried to create a community that allows people to avoid the worst of the modern world.

Filmed by Andrea Luka Zimmerman over a period of ten years, Erase And Forget uses archival footage and choice soundbites from the subject to create a detailed portrait of a man who cannot be reduced to one moral point. He's also, by turns, a frightening and sad figure. It's easy to believe that wartime was somehow easier for this individual, allowing him to push aside indecision and any chance of failure as he continually works to keep people safe and push back deadly enemies.

Ted Kotcheff appears onscreen to discuss First Blood, and the development of the character of John Rambo, and it's a painful reminder of two things. One, First Blood was based on a very typical experience of soldiers who came back from a war they couldn't say they won to American citizens who resented them for having gone over there in the first place. Two, the character started off as a passive drifter who didn't want to be forced to fight again, before being developed into a one-man army who became the poster-boy for action movie fans and anyone who loved guns. The image, indeed the icon, was hijacked and turned into something that wasn't necessarily intended. You COULD say the same about Gritz. He's a believer in his right to bear arms, he mistrusts the government, and he is constantly reminded of the sacrifice that has been made for his country. That sacrifice has taken pieces of himself, and pieces, and lives, of those who have served. It changes hearts, minds, and bodies. Those beliefs have seen him held up as an idol by those who wish to use his methods and apply them to their own political agenda, and it would be easy to blame Gritz for giving them someone so easily admirable, but he doesn't share all of their opinions (especially when it comes to race, it would seem) and has to be given the doubt.

Which brings us back to the start. This is a man I would disagree with in so many ways, especially when it comes to the gun issue, but he is also a man I have to give no small amount of respect to, whatever may have happened to him after his military years (and this documentary only scrapes the surface, despite the time covered). Considering what he has given over his lifetime, he deserves 90 minutes from you.

I am going to make the obvious Rambo selection here.
Americans can get some Rambo here. 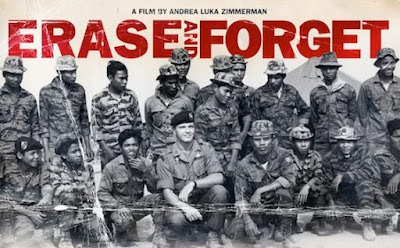