Arguably best remembered nowadays for the beautiful music from Ryûichi Sakamoto, Merry Christmas Mr. Lawrence is a worthy film that looks at the strained relationship between the prisoners and officers of a Japanese POW camp. It's a shame that it never feels like there's still a war raging beyond the confines of the camp but that may be more to do with the source material (it was, after all, based on a true story by Laurens van der Post) than limitations set on the film.

Tom Conti plays Col. John Lawrence, a man who finds himself favoured by the camp officers (a Sergeant played by Takeshi Kitano, billed here simply as Takeshi, and the Captain in charge of the camp, played by Sakamoto, the score composer). Col. Lawrence maintains his position by, for the most part, trying not to rock the boat as he also attempts to keep his fellow prisoners alive and well. It's a delicate balance, one that sees him frowned upon by the likes of Group Capt. Hicksley (Jack Thompson), and it's one that is upset as soon as Maj. Jack Celliers (David Bowie) arrives at the camp.

Directed by Nagisa Oshima, who also worked on the screenplay with Paul Mayersberg, Merry Christmas Mr Lawrence is a film about war that is most interested in showing viewers how every trait is heightened and warped under those conditions. Courage, cowardice, love, hate, lust, remorse, happiness, and more. The central characters deal with all of these things in a variety of ways, and we're often shown the motivation for their decisions, either in the moment or through flashbacks that explain their stubborn refusal to make life easier for themselves (in the case of Celliers).

This is a superb role for Conti, giving a fantastic performance as the typical Brit soldier who hopes to keep calm and act with a modicum of grace in the face of great brutality. The other standout turn comes from Takeshi Kitano, playing someone who at first seems irredeemable but who may be more than just your cliched sadistic camp worker. Sakamoto has more difficult material to work with, and he isn't quite up to the task (he's a better musician than actor), but Bowie does well, working effectively in some difficult scenes that benefit from the fact that the character is being played by David Bowie (and what viewers know of his established persona). Thompson does well in his small role, and there are a number of cast members who make a good impression in their limited screentime, such as Alistair Browning, James Malcolm, and Johnny Ohkura.

Those expecting something powerful and emotional may be surprised to find a coldness here. Merry Christmas Mr. Lawrence is much more about the psychological changes and damage that can be caused by war. It spends a lot of time, both subtly and more overtly, showing how the central characters affect each other, on purpose and by accident. It's almost a case study, at times, and not all of the directorial and scripting decisions work as well as they could, but there are times when it is magnificent. And a lot of those times are accompanied by that beautiful Sakamoto score.

This wouldn't make it into any kind of top list, if I had the inclination to try and rank the war movies I have seen in my life, but I am glad to have finally seen it. Bowie was the name I remembered most being associated with it, but it's Conti and Kitano who own the film.

There's a blu ray here.
Americans can get it on Criterion here. 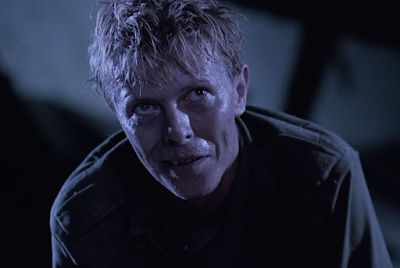