I have mentioned before, just recently, that my brain often works in my favour when it comes to movies and the time I may need to take to process them. More often than not, I may end up waiting a little while until I get to revisit a film I was wildly enthusiastic about, giving me some time to dial things down a notch and keep some perspective.

I don't want to do that with The Giant, even if I suspect that it may not move me on future rewatches as it did with this first viewing, because I just want everyone to seek it out and love it as I loved it. It's a beautiful, moving, film that takes viewers, to use a horribly overused phrase, on a rollercoaster of emotions.

The film is all about Rikard (played by Christian Andren), a young man with some mental health issues and extreme deformity. His two main loves are his mother (Anna Bjelkerud), who he was separated from many years ago, and the game petanque (similar to bowls, but you throw the balls in the air rather than roll them along the ground). He plays petanque with Roland (Johan Kylen), a man who seems to inhabit the role of both friend and carer, and the two want to make it all the way to a major final, where they can show everyone how good they really are.

With fantastic performances from everyone involved (but particularly Andren and Kylen), a constant core of characters who have a sweetness to them without seeming too saccharin, and fantastical dreams that see Rikard imagining himself as the titular titan, The Giant is an astonishing feature debut from writer-director Johannes Nyholm. The first film it brings to mind is The Elephant Man but it mixes in the traditional sports drama elements in a way that doesn't feel forced and helps the pacing and tone of the film (because I'd hate to imagine if this just focused on the sadder moments that Rikard experiences).

From a wince-inducing surprise in the opening scenes to the fantastical giant moments, to scenes showing idiots trying to make fun of Rikard for his obvious physical differences, to the moments of sheer heartbreak that are often played out with Rikard unable to fully express himself, or even understand everything as it happens, The Giant is an experience that provides both the predictable and the unexpected in equal measure. It's a wholly satisfying experience, despite it also being an incredibly sad one at times.

I may not always rate this quite as highly as I do now, but that doesn't really matter. What matters is how it affected me, and is still affecting me as I write this review. And if just one or two other people seek out the movie and end up equally moved by it then this was the right time to write up this review.

Here's an Iron Giant to pick up, if you like.
Americans can get a big friendly robot cartoon slice of joy joy here. 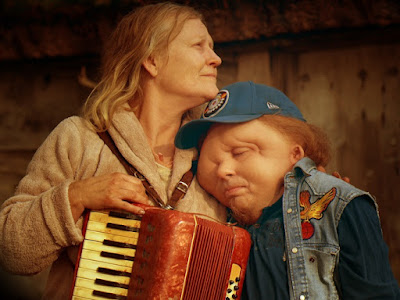