So here's the thing, Black Christmas is a bad movie. It just is. Sorry for those about to rush to defend it, I am about to quantify my judgement very shortly.

The third incarnation, I believe, of this horror tale of a group of sorority sisters being stalked by a mad killer, Black Christmas both stands and falls due to the way the material has been turned into something different from both of the previous movies bearing the same name.

Imogen Poots plays Riley, a young woman attending a college that seems to be gaining a bit of a reputation for sexism and misogyny. There's even a petition to protest the teaching tools of one Professor Gelson (played by Cary Elwes). There are other characters, and other plot elements, but the only one worth bothering about is Riley, and viewers learn that she survived an assault in her recent past by a boy who went on to continue living his life without a care in the world.

Directed by Sophia Takal, who also co-wrote the thing with April Wolfe, this version of Black Christmas is a film designed to display the everyday battles that women have to be involved in, just to have their views acknowledged, to maintain/gain their rights, and to stay safe. It's a horror film reflecting the "me too" movement, and one that also ensures you remember how pathetic it is to have to state "not all men". There are moments when that works well, it's not subtle about it, but it's also depressingly not unbelievable. Then the third act happens, and everything goes horribly wrong. The explanation of events is absolutely terrible, like something written by a child who didn't know how to end their story, and the more straightforward horror sequences completely lack tension or thrills.

This would have been much better if it hadn't been marketed as a Black Christmas movie. Make it a socially-conscious horror movie. Better yet, remove the traditional horror element, and show how life as a female college student can still be a complete horror movie. Any attempts to incorporate familiar elements are completely mishandled, and just fall flat. You don't get terrifying phone calls, you get text messages from anonymous numbers. You don't get impressive kill scenes, you get what feels like a number of sanitised, bloodless, ones.

Poots is good in the lead role, and is at the centre of all of the best scenes (while the makers understand what they're doing), but even she can't do enough to improve the awful mess that drags everything down as the plot unfolds. Aleyse Shannon, Lily Donoghue, and Brittany O'Grady are a number of the sisters, with none of them really standing out (certainly not for the right reasons), and Caleb Eberhardt is a good guy proving that there are one or two around, and they don't stand up to shout "not all men". Elwes is given a role that feels right for him, so that works, but nobody else is worth mentioning.

Although made with a degree of technical competence, and although I have mentioned the good points that are made, particularly in the first half, Black Christmas still ends up being one of the worst mainstream horror movies of the past year or two. It's a step down from Takal's previous effort, Always Shine, and I hope she does something next that can help us forget this one. It's so inept that it made me think fondly of the Glen Morgan remake, and that's saying something. 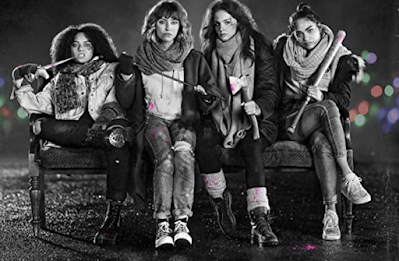