Noelle (Candace Cameron Bure) is the shoe addict of the title, a woman who works in a department store and seems to have nothing too wrong with her life. But think again. Not only has Noelle abandoned her dream job of making the most of her talent for photography, but she also doesn’t have a man. It has been years since her last relationship, which means the most important thing needed to make her life complete is a man. Of course. Maybe it could be her new upstairs neighbour, a nice fireman named Jake (Luke Macfarlane). That all depends on the changes she can make when given a chance to revisit crucial past moments by an angel named Charlie (Jean Smart).

Based on a novel by Beth Harbison, writer Rick Garman and director Michael Robison show that they know their stuff when it comes to the perfect seasonal TV movie for their star/producer, Bure. The slim plot is a fun riff on A Christmas Carol, and there are enough decent supporting characters to keep it all from resting completely on the shoulders of the leads, although Bure, Smart, and Macfarlane are more than up to the task.

Bure is a likeable lead, and it’s obvious why she makes such a good leading lady for this kind of fare, and she veers easily between confusion, excitement, dejection, and determination to prove someone right/wrong. Macfarlane is the perfect guy, of course, and his main characteristic is a longing to be taken seriously while also still having some fun, and Smart is wonderful in her angelic role, sometimes seeming nervous as she learns some tricks of the trade and spending other moments almost winking at viewers as she pretends to be ignorant of pieces moving into the exact places she wants them. Dam Willmott is Noelle's father, Tenika Davis is an understanding and supportive friend, Lorna, and Kristian Bruun and Marcia Ricossa are Noelle's main bosses.

It’s very predictable, of course, but the script and direction take you to the expected destination with one or two welcome attempts to wrongfoot you while the plot unfolds (oh, I forgot to say, Charlie gives Noelle shoes to wear, and those shoes take her to certain points in her life that can change the path she is due to stay on). For the kind of film it is, this is superior fare. I would happily watch it again, and recommend it to others, if only for the sense of fun and mischief that Smart brings to every scene she's in. 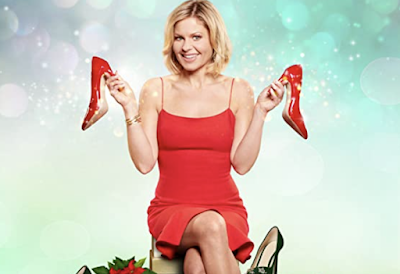