Alison Sweeney and Marc Blucas play two TV show hosts in this Christmas TV movie. Sweeney is Melissa Merry. Blucas is Brian Bright. Their show is, of course, Today With Bright & Merry, and they are hugely popular, thanks to their onscreen chemistry. But that chemistry often disguises disagreements they have off-camera. Melissa likes to be prepared, and resents what she sees as an easy career path for Brian (who started off as a sport star, moved into a hit reality TV show, and then landed the presenting gig). Things may warrant a re-appraisal, however, when Brian hands in his notice. This makes things feel slightly different as the show begins a series of live Christmas specials from the town of Mistletoe, with the final show planned to be the time to announce Brian's departure to the public.

Perhaps it is down to the fact that daytime TV shows have that layer of forced niceness about them, perhaps it's the chemistry of the two leads, or perhaps it's just a better script than so many others, but Good Morning Christmas! is easily one of the better Christmas TV movies I have watched in recent years. There's no messing around with the formula, but it's worked well enough throughout a plot that just feels a bit less strained than most.

Director Paul Ziller does well with the resources available to him, possibly helped by the fact that he can get away with showing a lot of equipment onscreen (although that may be totally different equipment from whatever is used to actually film things, for all I know), and Riley Weston's script manages not to feel as if it is rushing anything, despite us knowing that a relationship needs to be developed, and obstacles overcome, within the 84-minute runtime. Leaving breaks for adverts.

Sweeney and Blucas certainly do their bit to help. Not only are they both very believable in their roles, they get on really well together. And not in an eye-rolling way. It's clear at the beginning that they work well on their show, despite the tension hidden off-camera, but the moments that have them learning to better appreciate one another are nicely done. Nicole Oliver is also very good, playing the show producer who can see the change gradually happening, and Matthew James Dowden, Jay Brazeau, and Kayla Heller are various Mistletoe residents who help to provide some small lessons, even if inadvertently, while Kat Ruston plays Christy, Brian's girlfriend who is happy to see him taking the next step in his career.

I'm still not going to overdo it with my praise here - even the best of these movies have to be marked down because of the adherence to formula - but this is one that I highly recommend to anyone making their way through the latest batch of festive treats in the TV schedules. Enjoy.

If you enjoy these reviews then you can buy me a hot chocolate here. 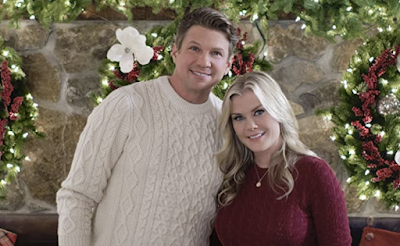