As if the year 2020 wasn't quite mad enough as it is, it ends with a film in which Mel Gibson plays an unhappy, tired, Santa Claus who is due to be targeted by the gun sights of a grudge-bearing Walton Goggins. Yes, that is the basic plot of Fatman, but there's a bit more to it.

Times are tough. Less kids are making it on to the "nice" list, which means gift-delivering Chris, AKA Santa, is leaving more lumps of coal than ever before, and this means that he and his wife (Ruth, played by Marianne Jean-Baptiste) can barely afford to keep their household in working order. Chris reluctantly ends up taking on a military contract, a gig that will at least make up for the income shortfall in recent years. Meanwhile, a spoilt young kid (Billy, played by Chance Hurstfield) pays for someone to kill Santa. That someone seems to have been waiting for this moment for most of his life.

Written and directed by Eshom and Ian Nelms (two brothers who have been working on movies together for a number of years now), Fatman is an interesting idea dragged down by a couple of major mis-steps. Although technically competent, and fairly well-plotted (with the exception of what feels like one major plot hole - why didn't the character played by Goggins task himself with hunting down Santa years before a rich kid hired him?), it's never as amusing or entertaining as it could be.

First off, you have the problem of the casting. I still don't mind seeing Mel Gibson onscreen, but he's not a good fit for the role of Santa. Even this Santa. He's neither good nor bad, just a grouchy old man who can no longer seem to bring any joy to the world.

Second, you have the problem of the tone. Is this supposed to be funny? It's not, not really. It's also not tense, not thrilling, and doesn't have any drama that fully engages viewers with the material. Going in to this blind, it may even take some viewers a little while to join the dots. That could have been part of the fun if the trailer hadn't given everything away already.

Third, it's kind of pointless. A lot of movies can be pointless, that's no major negative in and of itself, but this one is pointless in a way that feels annoyingly unaware of itself. By the end of the movie you may find yourself thinking not that much has changed, despite some characters stating otherwise, and you'd be right. There's magic used, and forgotten, when it's convenient, and none of the consequences have any proper impact. It's not quite a lump of coal in your stocking, but it's the small fruit selection you're made to eat in between handfuls of chocolates.

I've already mentioned Gibson being a bad fit for the role, but at least Goggins does better, despite his character being occasionally mishandled (although his single-minded approach to his main task is great). Hurstfield gives an absolutely perfect performance as the rich kid not used to things not going his way, Marianne Jean-Baptiste does a good job as Ruth, AKA Mrs. Claus, and there are plenty of solid supporting turns.

Worth watching as an oddity, Fatman isn't one you're likely to revisit often (if at all). Yet it feels fitting that this is one of the new Christmas-themed movies we got to help us towards the end of 2020. 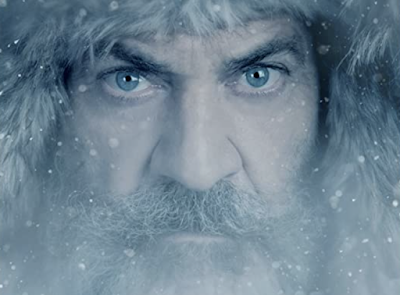