Written and directed by John Russo, and I use both of those terms very loosely, Santa Claws is a cheap, and fairly shoddy, horror that delivers some terrible acting, some poor kills, and plenty of gratuitous nudity. So I can't say that I completely hated it.

The lovely Debbie Rochon plays Raven, an actress who has made her name in a variety of roles that made the most of her physical appeal. She's having some marriage troubles with Eric (John Mowod) and is spending a fair amount of time in the company of a dedicated fan, Wayne (Grant Cramer). Wayne offers to babysit Raven's children, but just intends to drug them and give himself an alibi for a number of killings. And it's all connected to an incident in his youth, when he caught his mother in bed with someone dressed as Santa Claus and shot them both dead.

That previous paragraph may have inadvertently made Santa Claws sound more substantial than it actually is. There's a plot, yes, but it's just an excuse for various moments in which women get nude and/or gyrate while someone films them. Which works just fine for me, especially when it is Rochon as the focus of any such scenes.

Russo is savvy enough to have made both this and Scream Queen's Naked Christmas at the same time, with the latter a "documentary" featuring a number of shared cast members. Although this is not a very satisfying approach (mind you, I am sure it got them double the income from one main expense), anything that keeps Russo away from further cashing in on Night Of The Living Dead, the screenplay that remains the highlight of his entire filmography.

If it wasn't clear enough already, Rochon is the highlight of the movie, in a role that doesn't seem entirely dissimilar to her real life. She actually seems to be having fun here, delivering dialogue that illustrates the good and the bad about making a career as a Scream Queen. Nobody else comes close to having her presence, although Kramer is more fun in the moments that have him acting even more insane. Sue Ellen White and Amanda Madison (billed here as Christine Cavalier) are the other memorable characters. And when I say memorable I mean "naked".

Look, it's obvious from the earliest moments that this is not good. It's also obvious that it is made for a very specific audience. I am a member of that very specific audience, a fan of Scream Queens who worked damn hard to earn that position (don't get me started on a rant about the people claiming this title nowadays without deserving it). I love the horror workout featuring Linnea Quigley. Despite me being receptive to material like this, THIS particular gem didn't work for me. At all. But it still gets points for having Rochon in the lead. 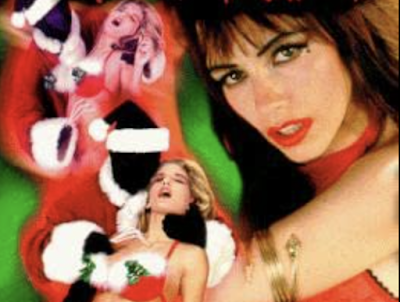