Directed, and co-written, by Clea DuVall, Happiest Season is the LGBTQ+ Christmas movie that you never knew you wanted. And it's yet another great role for Kristen Stewart, who continues to prove herself with performances so often ignored by her detractors.

Stewart is Abby, a young woman excited by the prospect of spending Christmas with her partner, Harper (Mackenzie Davis), and Harper's family. She hasn't met any of them before, which makes the whole thing a very big deal. There's just one problem. Harper hasn't come out to her family. She asks Abby to play along for the time being, pretending to be just a flatmate, and assures her that she will tell everyone when the time is right. The expected shenanigans ensue, with Abby trying her best to please everyone.

A great blend of comedy, Christmas trimmings, and moments that feel painfully honest, Happiest Season really brings out the best in everyone involved. DuVall has been honing her directorial skills for a number of years, and shows just how good a match she is for this material (which feels very autobiographical at times, a personal movie that allows DuVall to share some of her own feelings/experiences from her life). There are moments that many viewers may think take things a bit too far, with people watching and insisting that if they were Abby then they would have left almost at the very start of things, but think back to your own relationships, to times when someone has asked you to just play along with a white lie, or to attend a function you didn't want to be at, and remember how long you would put up with it for the sake of someone you love. Meanwhile, your partner starts to relax, and forgets how uncomfortable, or neglected, you might be feeling. That's what happens here, but with the added tricky knot of sexuality, and someone being too afraid to show others who they really are.

Stewart is a great presence in what is arguably her best role yet, perhaps giving her moments she also already felt familiar with. Davis is also very good, and her casting in the role of Harper makes it a bit easier to tolerate her character as she continues to become a bit more selfish and insensitive. Alison Brie and Mary Holland play two very different sister, both competing alongside Davis for the affections of their parents (played by Mary Steenburgen and Victor Garber). Brie does her all-too-perfect act that she's done a number of times before, while Holland, who also co-wrote the movie, is a scene-stealer as someone who hasn't achieved as much as either of her sisters, but is at least relatively happy in her life. As for the aforementioned Steenburgen and Garber, both are excellent, with Steenburgen having much more of the screentime, and a number of moments in which she is snippy to people destabilising her planned perfect Christmas. Aubrey Plaza and Jake McDorman are two very different ex-partners, allowing Abby to find out more about the woman she loves, a woman she is now not sure she even knows, and Dan Levy is wonderful and hilarious as John, a gay BFF who spends a lot of the movie advising Abby over the phone.

The best thing about Happiest Season is that every different element feels genuine. There are genuine laughs, there's a genuine authenticity to the central premise, and the moments that bring the drama and heart of the film feel genuine, and serve as a constant reminder of what so many people still go through in far too many households. Oh, it's also very much always a Christmas movie, so don't think I am suddenly viewing this as cinéma vérité, but the many small moments that need to feel real DO feel real.

Highly recommended, and I hope DuVall has enough success with this to allow her to pick another project that she connects to just as strongly. 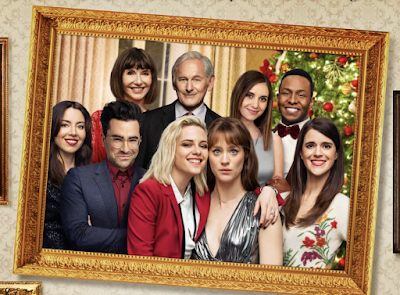