I am well aware that I enjoyed The Princess Switch more than most people. Or, to put it correctly, I was one of the few people who enjoyed it unironically. I was especially complimentary about the lead performances from Hudgens, taking on two characters, and doing a great job of portraying those characters pretending to be one another.

This sequel, featuring a third character portrayed by Hudgens (something I mentioned as an obvious sequel idea before this was even announced), brings everyone back together for a plot that has Hudgens throwing a spanner in the works as . . . an evil schemer.

Just like I said. Although nobody decided to use any of my title suggestions.

Anyway, Stacy (Hudgens) is quite happy. Margaret (Hudgens) is less happy, dealing with the pressure of her duties after separating from Kevin (Nick Sagar). And Fiona (Hudgens) is a relative who thinks she can plan a little switcheroo to get her hands on a fortune and generally improve her life.

Mike Rohl directs once again, and writers Robin Bernheim Burger and Megan Metzger are back with to plot out another adventure for the characters they created, and the only change in the central cast would appear to be Mia Lloyd taking over the role of young Olivia (Kevin's Daughter). It's clear that viewers should know what they're getting even before they press play. It's something different, but almost exactly the same. Like so many other Christmas movies.

Despite aiming to never do it again, Stacy and Margaret switch once again, temporarily, which causes a headache for the scheming Fiona. Kevin wonders if there's a chance to repair a relationship, Prince Edward (Sam Palladio) remains quite sweetly oblivious of identity changes, until the finale forces everyone to divulge the complete truth, and you have characters trying to overcome their self-doubt, carefree moments in the snow, and a few dubious characters helping Fiona try to get away with her planned crime.

I'm not going to pretend that I didn't still enjoy this, but that's due more to my own goodwill than it is due to the quality of the film itself. The first film felt contrived in a way that was necessary for the whole central premise. This feels contrived in a way that is a bit, well, lazy and careless. Although the main plot point about Fiona is a fun direction for the film to take, it's mishandled, while almost every other aspect feels like a retread given very little actual thought. I know, you can say that about most films like this. That's true. It just feels more irritating this time, mainly because everything was in place to make this an enjoyable sequel. It sadly ends up just being very average instead.

Hudgens is once again good in her role (although even her performances don't feel quite as . . . sharp this time around), and both Palladio and Sagar are fine as the main men in her lives. Lachlan Nieboer is enjoyably easy to mistrust and dislike, playing an assistant/advisor named Antonio, and Ricky Norwood and Florence Hall are good fun as Fiona's accomplices. Lloyd is fine in the role of young Olivia, and Suanne Braun enjoys reprising the role of Mrs. Donatelli.

Perhaps on any better day I would have enjoyed this more than I did. I somehow thought it would manage to be on a par with the original. I didn't hate it, but I didn't enjoy it half as much as I expected to. And I don't go into these things with high expectations. 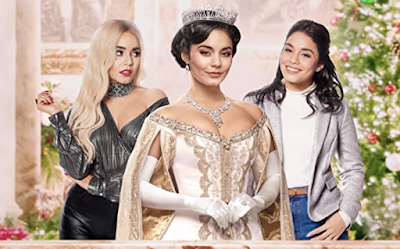