First off, the title is a bit of a con here because at no point to Abbott and Costello actually go to Mars. Am I spoiling the whole movie for you with this piece of knowledge? No. The two stars do end up in outer space and they do explore some alien territory, but it's most certainly not Mars and I can only assume that the title was left so inaccurate because it just had a nice ring to it.

If you have a top secret spaceship that you're hoping will go on an amazing journey of discovery then the last thing you should do is let Abbott and Costello loose in it but that's exactly what happens near the start of this movie. One or two button pushes later and the boys are flying around with no idea of just how to safely land.
They first arrive in New Orleans during Mardi Gras, thinking that they're surrounded by aliens, but that's just the start of their travels.

Directed by Charles Lamont, this outrageous and unbelievable adventure still manages to be a lot of fun from begining to end by simply concentrating on the many comedic opportunities that the premise allows and not letting anything like logic or any semblance of reality get in the way. Sometimes this can harm a movie but I'm happy to say that it's not the case here. The script by D. D. Beauchamp and John Grant is enjoyable and the performances from Abbott, Costello, Horace McMahon and Jack Kruschen (as a pair of escaped convicts) and a large number of Miss Universe contestants are all easygoing and should make you smile.

There are one or two set-pieces (including a tussle without gravity) that stand out, a pleasing lack of any musical numbers and plenty of decent one-liners in the script. Even the dated look of the sci-fi elements (big fishbowl-space helmets, endearingly poor special effects, etc) actually made me like the whole thing even more, like some comedy riff on the sci-fi comic books of the time. Which is, essentially, what it is. Overall, this ended up being a lot better than I expected and I'd happily watch it again. 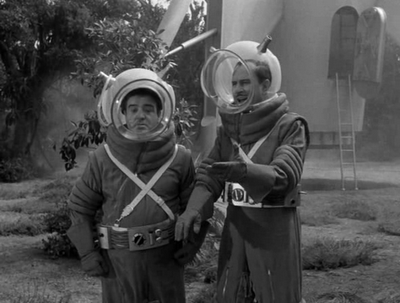