Frank Henenlotter is, to me, the most wonderful madman to have ever been allowed to direct movies and I thank my lucky stars that he shared his warped and hugely entertaining vision with audiences. If you haven't seen Basket Case and, my particular favourite, Frankenhooker already then please do so. Oh, but make sure you also fit this one into your schedule.

Brain Damage is all about a relationship that develops between Brian (Rick Hearst) and Aylmer, a relationship that works well for both of them. Unfortunately, Aylmer is a parasitic creature that releases euphoria-inducing liquid directly into Brian's brain in return for sucking the grey matter from various victims. While Brian is on his "high" he doesn't fully realise just what's going on and even as things start to become clearer he knows that while he must do the right thing . . . . . . . . . . . . . . . . he is also already addicted to getting his fix as often as possible.

I don't think that Frank Henenlotter is capable of making a bad, unentertaining movie. Even Bad Biology (which I thought was a bit below his usual standard) had enough twisted fun to keep me happy. He started off writing and directing his own particular brand of madness and has continued to do things very much his own way over the years. Many other people rate Brain Damage as his finest hour and, while I may not agree, it's certainly up there with his other best works.

The acting is fine from Rick Hearst and everyone onscreen (including Gordon MacDonald, Jennifer Lowry, Theo Barnes, Lucille Saint-Peter, Vicki Darnell - who has, arguably, the most memorable scene of the whole movie - and Beverly Bonner) but every aspect of the movie is overshadowed by how wonderful a creation Aylmer (voiced by John Zacherle) is and the visuals that illustrate the way he changes Brian's brain. Considering the obvious low budget, there are a number of FX moments and set-pieces that stand up to this day as impressive pieces of movie magic.

If you like the work of Henenlotter then you'll undoubtedly like this movie. You may, like so many others, love it and that love is not undeserved. Oh, and fans of Basket Case (despite the information regarding region coding listed on the packaging/at Amazon, horror fans will be delighted to know that the Basket Case Bluray will play on any player) will enjoy the amusing cameo from Kevin Van Hentenryck. 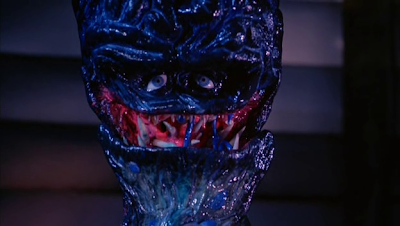