This may not be a terrible movie but it's clear that at this stage of their career, Abbott and Costello were way past their best. There are no BIG laughs here, instead the film throws in a number of comedic stunt sequences. Those moments are enjoyable enough but just not what I want to see in an A & C film. I want the wit, the confusing wordplay and the great blend of stupid and smart that the boys do so well.

The plot sees our two leads swindled out of $5,000 dollars (they buy a movie studio that turns out to be the old Edison studio, not in use and not for sale) by a man who then heads to Hollywood to pass himself off as a talented European director. Once they realise the con, Bud and Lou go on a journey to find the man and get their money back. That journey ends up getting them inadvertently involved in the movie business and leads to the titular meeting with the famous Keystone Cops.

Directed by Charles Lamont, and written by John Grant (based on a storyline by Lee Loeb), there is certainly more to this movie than just the usual buffoonery and money-chasing antics. Many moments throughout the film actually look at the wonder of the cinema screen and the inclusion of the Keystone Cops should also clue you in to the fact that this is a bit of a celebration of the development of slapstick and comedy routines in the movies.

Bud and Lou are still amusing enough when not being stuck in the middle of too many special effects and stunts, Fred Clark is good fun as the conman, Lynn Bari is his lovely accomplice and there's a nice cameo from Mack Sennett before that third act that finally brings in the Keystone Cops.

While it's not a great comedy, nor is it a great A & C film, there's a nice warmth in this movie and an affection for the works of those who started off before sound was developed and helped to shape some great sequences that would entertain cinema audiences. 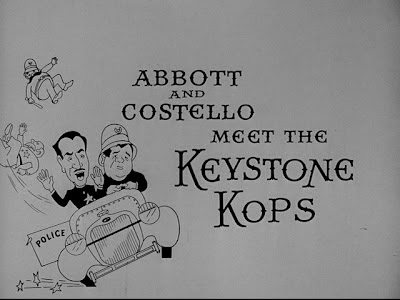